In celebration of the United States Independence Day, Deep Trekker takes a look back to appreciate how their underwater drones positively impacted Americans

The Fourth of July marks the celebration of the birth of our neighbor nation the United States of America. Marked by patriotic displays of American flags, bald eagles and fireworks that paint a vivid picture of a proud nation rich in heritage, laws, history, and people.

As a Canadian company located in close proximity to the border, Deep Trekker’s team has fond memories of participating in the vast array of celebrations that seem to carry over the border every year, enjoying an extended holiday from our own independence day marked just 3 days prior.

Mosaic of Deep Trekker's Adventures in the United States

Deep Trekker’s partnership with the United States is strong and deep (pun intended). We appreciate the customers that have become family and the support our American friends have given us since the very beginning. The last year has been marked with many huge accomplishments and extended friendships all over the US’s great nation.

Pearl Harbor - Filming the Inside of the USS Arizona

December 7, 2016 marked the 75th anniversary of Pearl Harbor; an event that forever changed the face of America and ultimately precipitating its involvement in World War II. This momentous occasion was marked by memorials and celebrations all over the United States, as citizens remembered those lost, the devastation of the day, but more importantly the resiliency of their great nation and the unwavering patriotism of not only the Navy but of the all American citizen. In conjunction with the 75th anniversary, Deep Trekker was invited by the National Parks Service (NPS) Submerged Resources Center, WWII Valor in the Pacific National Monument and E-trac to perform the first live feed exploration of the USS Arizona since its sinking. Deep Trekker President, Sam Macdonald sat with Donald Stratton a US Navy Veteran who survived the sinking, as she piloted the DTG2 Remotely Operated Vehicle (ROV) to feed live video back up to the surface, showing eerie and fascinating images of the Arizona. It was an honor for the Deep Trekker team to be a part of the exploration of such an emotional and integral part of US history.

Recognized as the Most Innovative Product

In April this past spring, Deep Trekker was invited to Washington, D.C. where we were awarded the Abbott Most Innovative Product Award by The North American Society for Trenchless Technology (NASTT) for the DT340 Pipe Crawler. NASTT annually recognizes two companies with state-of-the-art products in either new installation or rehabilitation for their achievements in advancing the trenchless industry. Deep Trekker was thrilled to receive such an accolade and honored that a US foundation recognized the ingenuity and innovation of a Canadian company. 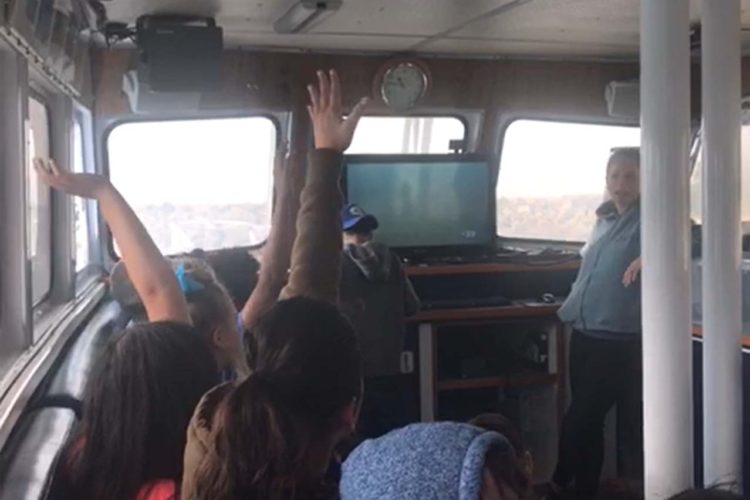 The Ocean Institute in Dana Point, CA purchased a Deep Trekker DTG2 ROV this past year, with a mission to inspire a young generation of American children to become marine scientists. By creating a state-of-the-art facility which includes, the latest in educational laboratories, tall ships, a research vessel and now an oceanographic ROV. These activities are intended to encourage engagement, ignite curiosity, build a sense of responsibility to the protection of water sources and a commitment to learning. Having a Deep Trekker ROV utilized to bring this initiative to fruition has been a rewarding experience.

Last summer we cheered as Block Island off of Rhode Island introduced the first offshore wind farm in the States. Wind farms are not a new phenomenon in the US, however, the development of the Block Island site in coastal waters shows an environmentally friendly move towards recognizing wind power as a viable alternative power source. Deep Trekker is all about utilizing the oceans to power our homes and cities in ocean-friendly amazing ways and we were thrilled at this innovative initiative by our US friends.

This Independence Day the Deep Trekker team looks fondly to our friends in the South with great appreciation and admiration for a year full of wonderful partnerships and memories! From the Deep Trekker team to all of our American friends and their families, may you have a very safe, healthy and happy Fourth of July!