Hidden below the surface of the ocean’s waters are numerous unknowns ranging from unidentified species to missing shipwrecks. Among these unknowns are munitions dropped into the ocean around the globe during decades of military training and conflict. Today, the locations and state of these munitions is of ever-increasing concern due to the potential hazards they pose to surrounding ecosystems and people that may come in contact with them. Companies like CH2M, an organization dedicated to finding solutions to complex problems, are helping the military find underwater munitions and develop solutions to the hazards they may pose. When possible, CH2M is utilizing Remotely-Operated Vehicles (ROVs), such as the Deep Trekker mini-ROV, to provide critical information on the location and condition of underwater munitions and their surroundings through the lens of a camera instead of risking the safety of divers.

CH2M is a global engineering company providing consultancy, design, construction, operations, munitions response, and other infrastructure services for cities, private companies, communities, and local and federal governments, including the Department of Defense. With over 25,000 employees, CH2M can be found all around the world tackling complex issues such as the cleanup of River Thames in London, developing water treatment technologies in Northern Virginia, and tapping remote gas fields in Abu Dhabi.

The company started out as a small engineering firm and today is one of the leading solution service providers out there. They have specialists in many diverse fields that allow them to consult and take on tasks and challenges that may not otherwise be possible. With such a diverse team, the company fosters relationships with and between “public authorities, partners and neighbours to connect where people work to where they live.”[1]

CH2M sees challenge as opportunity and offers capabilities in fields such as nuclear, ports and maritime, wastewater, chemical, environmental planning and permitting, transit and rail, integrated waste management, munitions response, along with so many more.

One such project CH2M has taken on is a munitions response operation in the United States for which a creative solution is necessary. Two of the biggest challenges that the company has faced by taking on this project have been the issue of safety for the workers, as well as the designing of ways to protect the marine environment from the impacts that a job like this can have. 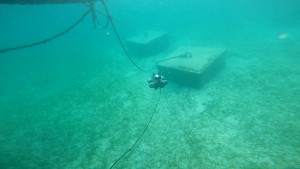 Among the many elements and tasks associated with the munitions response, there are several that highlight integration of creative solutions. The first is tracking the movement of munitions surrogates that were placed in known locations on the sea floor to help predict how actual munitions move, where they may end up on shore, and how they become buried/exposed. The second is evaluating sensitive and endangered underwater species and habitats to ensure that they can be protected while conducting munitions-related investigations and clean-up. Lastly, the project consists of inspecting the structure and integrity of marine barricades and buoys that deter the general public from conducting recreational activities in areas where underwater munitions may be located.

Their creative solution for this task comes in the form of a Deep Trekker ROV. Deep Trekker ROVs are completely portable and affordable, yet robust underwater inspection devices. Deep Trekker is a Canadian company based in Ontario committed to providing quality products and exceptional customer support. With the help of Deep Trekker’s DTG2 ROV, CH2M has been able to conduct much of the work described above that was traditionally performed by divers, thereby avoiding the inherent dangers associated with diving in general and the additional dangers associated with diving around unexploded munitions.

“Diving is an inherently dangerous activity. Where we can find alternatives to diving that still allow us to achieve our project objectives, we do” stated Lora Pride from CH2M.

Since the company’s entire purpose focuses on tackling difficult challenges, it is not surprising that ensuring safety is a high priority for CH2M. According to the United States Environmental Protection Agency’s Handbook on the Management of Munitions Response Actions[2] munitions survey work has traditionally required the use of divers swimming in search patterns and marking any anomalies located. It explains that this method creates safety risks that are not encountered when similar work is being done on land due to the fact that blast impacts carry further underwater than they do on land for an equivalent amount of net explosive weight. It states that “the average safe distance from an underwater detonation can be over five times that of a land detonation.”

Despite being a difficult feat, the team at CH2M understands the importance of a task like this and with the help of the Deep Trekker ROV, they have been able to significantly reduce the safety risks associated with how they go about their operations while simultaneously saving the client time and money. Due to the logistics and costs associated with using divers for jobs such as those described above, Pride explains that they estimated the Deep Trekker ROV paid for itself within the first several weeks of use.

Talk to us about making mine countermeasure operations safer with ROVs

Not only have they improved project safety with the use of the Deep Trekker ROV by no longer needing to send in divers for certain tasks, but they have found that having the ability to film the surrounding ecosystems and underwater structures has its advantages as well.

“Deep Trekker has successfully replaced divers for marine barricade/buoy inspections, significantly reducing cost and enhancing project safety. In addition, it has allowed us to view sensitive underwater habitats in areas where munitions investigations and cleanup actions are planned. It is anticipated having video of these habitats will greatly facilitate discussions (and development of protective procedures) with regulators responsible for the protection of those habitats/species” explained Pride.

Currently the team at CH2M is looking into other opportunities and applications for their Deep Trekker ROV, stating the fact that the unit is battery powered is a “big plus” for them. The combination of Deep Trekker’s small size and batteries allow the team to use it off the side of the small project boats without having to worry about lugging around a topside power generator or additional components. The battery life of the ROV is between 6 – 8 hours, providing ample time for the team to complete their work. The recharge time of 3 hours is well worth the portability and ease of deployment.

While the project is currently still underway, the team at CH2M has seen success in terms of their project goals. Combining the Deep Trekker mini-ROV with the creative thinking and diverse specialties that their employees offer has created the perfect team to tackle this otherwise complex job. Pride explains that as they continue to tackle this issue, they will utilize the ROV anywhere they can and brainstorm new ways in which the unit can be applied.

To learn more about Deep Trekker ROVs and their various applications visit their website at www.deeptrekker.com.