On June 22, 2015, after a 6 year-long-search for the Rio de Janeiro, a sunken German warship, AGDER-TECH, A-DYKK, and SEABED-SERVICES found the vessel sitting off the coast of Lillesand, Norway. The three companies teamed up and set out every spring for six years to find the warship that sank on April 8, 1940. This historically significance vessel was the only German ship to be shot down by the Polish during World War II. Part-way through their expedition, the team turned to the Deep Trekker mini-Remotely Operated Vehicle (ROV) to help with the task at hand.

Deep Trekker ROVs are underwater inspection tools used for an array of marine exploration projects. Depth rated to 150 meters, the Deep Trekker was chosen by the expedition team to search for debris laying along to ocean bed that would help indicate the exact location of the Rio de Janeiro.

“The debris was laying as a trail heading to the wreck” explained Espen Johannson from Agder-Tech. “Without the Deep Trekker we would have had to use a bigger vessel and work-class ROV. I don’t know of any affordable mini-ROVs that can work in the currents out there.”

The Deep Trekker proved to be a worthy tool. The team was able to locate the vessel by following the debris and identify it as the missing Rio de Janeiro; the first German warship to sink during the German invasion of Norway.

The 122 meter long ship was originally a vessel line for passengers and cargo but was used by German forces to transport troops during World War II.

The Rio de Janeiro left Stettin, Germany on April 6, 1940 as the German military began their execution of Operation Weserubung involving the invasion or Norway and Denmark during World War II. The shipped was stopped on route to Norway and never ended up reaching its destination. Approximately 180 people survived and another 200 died. The vessel was also carrying 73 horses, ammunitions and animal feed. When the ship was sighted by the Orzel, a Polish submarine operating under British command, it ordered the Rio de Janeiro to stop. Upon obeying this first order, the Polish ordered the ship to surrender or risk being bombed. When the Germans did not obey, Orzel launched its first torpedo causing the vessel to take in water and begin to sink. As crew members began jumping into the sea with a Royal Norwegian Navy Air Service plane circling above them, a second torpedo was fired hitting an ammunition depot and causing an explosion. The 180 people that did survive had the locals from Hovag and Lillesand to thank. 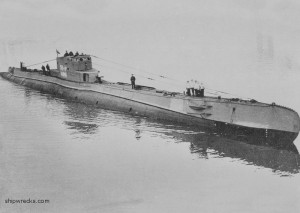 The sinking of the ship was an indication of the impending invasion of Norway as many of those saved and who passed away were found wearing German uniforms. Some German officers who were rescued also told local police of their nation’s plans to invade Norway but when the tip was reported to the Norwegian government it was not taken seriously. Consequently, Norway was not prepared when the Germans invaded Bergen on the morning of April 9, 1940. After a short battle the Germans succeeded with their invasion of Norway.

As a significant historical artifact from WWII for Norway, Germany, and Poland, the expedition crew made it their mission to locate the missing ship sitting at the bottom of the sea for over 60 years. Initially, the team used a larger work class ROV which required them to bring the ROV-container onboard their vessel. This also meant that the expedition crew needed a larger vessel. The companies could not use divers to locate the ship and follow the debris that led to the vessel because the area was simply too deep. 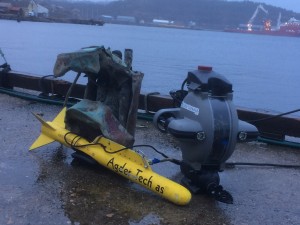 “After we got the Deep Trekker the search became more effective” explained Espen Johannson. Once springtime hit and the weather permitted, the team was able to take the Deep Trekker ROV with them using a RIB-boat to reach the area and begin searching for the missing war ship.

The Deep Trekker DTG2 is equipped with an easy-to-use handheld controller that displays what the ROV sees right from the screen on the controller. The complete portability of the Deep Trekker ROV made it the perfect fit to take on the important task of locating the missing vessel. The ROV is able to reach depths of 150 meters meaning that it had no problem plunging to the areas required for this mission.

Johannson recounts that the team did not know of any other affordable mini-ROVs that were able to operate in the currents in the area off of Norway where the Rio de Janeiro was located. Deep Trekker DTG2 mini-ROVs are designed differently than traditional ROVs with a spherical shape and patented pitching system, making it easier to maneuver when working in current. Manufactured using dye-cast aluminum that is anodized and powder coated makes the underwater submarine a robust tools for an array of undersea exploration expeditions. Priced between 5000.00 to 15000.00 USD the Deep Trekker ROV was within reach of the expedition team’s budget.

The day the team found an old motorcycle sitting on the ocean floor they knew they were close to the Rio de Janeiro. Locating the old German artifact that matched the description of the cargo from the missing warship was a huge feat for the team. The used the Deep Trekker ROV to identify the motorcycle and classify it as a German product that dated back to the WWII era.

The team continued using the Deep Trekker to follow a trail of debris scattered along the ocean floor that led them to the Rio de Janeiro itself. By adding weights at 50 meters of the tether, Johannson explains that the team was able to search in areas of 100 meter diameter. Once they knew the exact location of the ship the team rigged up a larger vessel with another larger ROV to identify the shipwreck. A final confirmation was completed by retrieving a lantern with a serial number on it, which provided enough evidence to conclude they had successfully found the Rio de Janeiro.

The team plans to continue using the Deep Trekker ROV to inspect the ship sitting at the bottom of the ocean. Being such a prominent war artifact for Germany, Norway, and Poland, the team plans to continue exploring and researching the contents of the ship and identify how many people sank with it. By equipping the Deep Trekker ROV with a sonar system, Johansson explained that they hope to gain a better understanding of the surrounding area.

As for the future plans for the ship itself, nothing is set in stone. Since the shipwreck is located at great depths and surrounded by strong currents, it is unlikely that it will become a dive site but rather remain an important historical site that is home to a number of stories that have yet to be uncovered.