Fishing drones are giving angler eyes on the fish below before sending down lures or preparing to gear up to dive in with spears.

Fishing Drone - Fishing is a game of patience whether you are floating by on a boat or perched on shore. Often, it seems more time is spent staring off in the distance than actually catching fish. Taking in the scenery is nice, but wouldn't it be wonderful to catch a fish or two?

Several tools are available to the avid fisher to aid in the capture of finned prey below the waterline. Many people mount a fishfinder aboard their boat to see where and how far down the fish are hiding. This is a good starting point. The fish seem to be in this area, so drop a line there. However, the waiting game may continue. 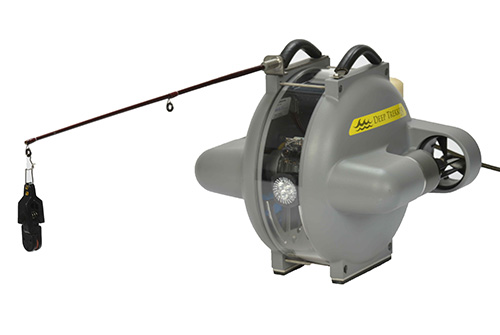 Some fishers have taken notice of underwater drones like Deep Trekker's DTG2 and immediately realized how they could be used to catch fish. The agile DTG2, built with an onboard high definition camera, delivers a clear picture of where the fish are hiding that is viewable on the surface from a lightweight, hand-held controller.

If locating the fish isn't enough, this Remotely Operated Vehicle (ROV) can be equipped with a downrigger to bring the lure to the prey. You can actually watch a fish grab the bait from the DTG2's live video display and then reel your catch to the surface.

Deep Trekker brings spearfishing to a whole new level. Our ROV has the ability to dive to 500 feet (150 metres) and inspect hunting grounds while divers are gearing up for the hunt.

Recently, we ventured out to Florida to experience the Miami International Boat Show; sharing a stand with Brownie Yacht Divers. Fishers and boaters of all types were able to operate and test out an underwater drone for themselves.

We met with many fishers who were looking to enhance their fishing game; they wanted the ability to scope out the area below to see if the fish were in fact there. Also, they wanted to monitor their bait to see whether the prey was being lured in. That is where Deep Trekker's underwater drones grabbed their attention.

Have Eyes on the Fish Below

Get the competitive edge on your prey; contact us to customize an underwater drone that will take your fishing game to the next level.