As the Deep Trekker team celebrates their 10th anniversary we’re taking a moment to reflect on the last decade. The last ten years have been full of innovation, growth and most notably - adventure!

Read on to hear about our favourite adventures of the last decade! 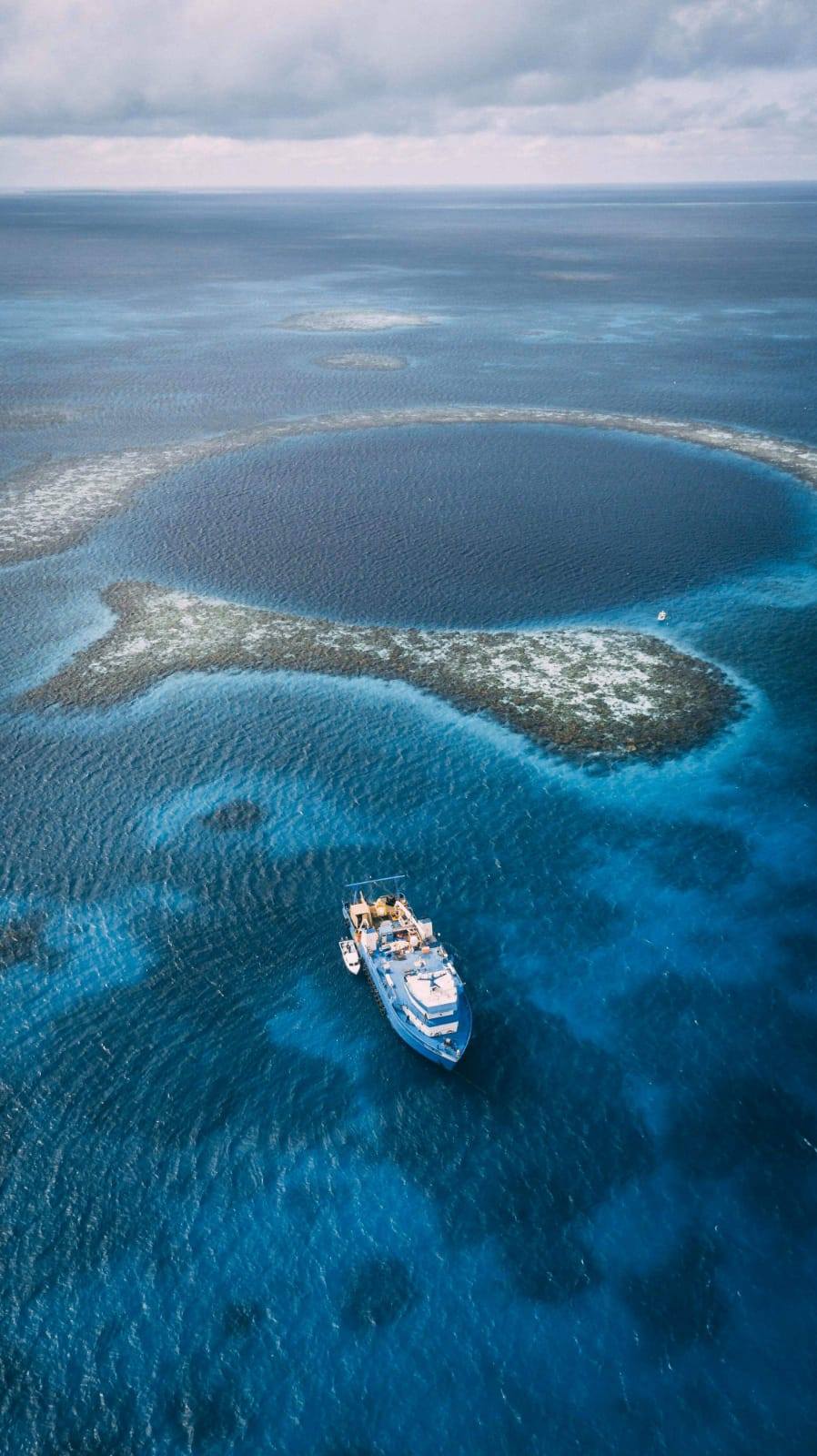 In the fall of 2018 Deep Trekker joined Aquatica Submarines, Richard Branson and Fabien Cousteau in a historic expedition to the bottom of Belize’s Big Blue Hole.

Situated in the center of Lighthouse Reef off the coast of Belize, the Blue Hole is a giant marine sinkhole that is 1,043 ft (318 m) in diameter and 407 ft (124 m) deep. To put its size into perspective, the Blue Hole could easily swallow two entire Boeing 747s in one gulp, undiscoverable from the surface. In 1971, the site's name was coined by legendary oceanic explorer and filmmaker, Jacques Cousteau as one of the top five scuba diving sites in the world. The Blue Hole is a part of the larger Belize Barrier Reef Reserve System which is a World Heritage Site of the United Nations Educational, Scientific and Cultural Organization (UNESCO).

The mission to the bottom of the Big Blue Hole was not just about feeding curiosity, but also about ocean conservation, education and scientific research. Using the Deep Trekker DTG3, along with the Aquatica Stingray 500, the bottom of the hole was charted to see what lay below.

Deep Trekker’s remotely operated vehicles and sidescan sonar acoustic imaging provided additional lighting and video coverage to allow both the onboard team and the viewers at home to see as much as possible.

During Shark Week of 2019 Deep Trekker’s DTG3 dressed up as a seal to aid researchers in studying the hunting patterns of Great White Sharks in the clear waters of Guadalupe. With marine biologist Melissa Christina Márquez at the helm, researchers were able to observe the distinctive patterns of sharks hunting in the uniquely crystal clear waters of Guadalupe versus sharks in more turbid waters.

In October of 2018 Deep Trekker was thrilled to host the first ever ROV Olympics! Taking place in Puerto Montt, Chile, ROV pilots from all over the country gathered to put their skills to the test for their chance to earn the title of Chile's Top ROV Pilot and to win their own DTG3!

The Olympics included four main events - fish pushing using the Deep Trekker mort retrieval, golf ball bucket challenge with a robotic gripper, slalom and lastly, clipping carabiners - in which Chilean participants were tested based on the fastest time to complete each challenge. The overall winner was determined by adding up the times for each challenge.

Pablo Sebastian blazed through the challenges to claim the title and his own DTG3.

2016 brought Deep Trekker to Pearl Harbour where the team was honoured to be asked to explore the interior of the USS Arizona. No human has entered the ship since it sank on December 7, 1941, the final resting place of 1,177 men.

As a matter of dignity and respect as well as the danger presented by the aging vessel to divers there is a strict no diver policy however, in order to understand how to best preserve the site the DTG2 was permitted to enter the vessel. This video was being streamed live to the surface for everyone to experience, including Donald Stratton; a USS Arizona survivor. Born in 1922, Stratton enlisted in the Navy after graduating high school, reporting to the USS Arizona. According to a profile by NavyTimes, as a seaman 1st class, Stratton had to scale three ladders to reach his battle station on board the battleship Arizona’s sky control platform before General Quarters sounded amid the bedlam of the Japanese attack that launched the United States into World War II. Working in partnership with the National Parks Service (NPS) Submerged Resources Center, WWII Valor in the Pacific National Monument and E-trac, Deep Trekker was able to shed light for the first time in 75 years on the inside of the historical site.

In the summer of 2019 Deep Trekker and Parks Canada’s Underwater Archaeology Team left for Cambridge Bay to the site of the HMS Terror. In partnership with Inuit, Parks Canada has been working to explore the wrecks of HMS Erebus and HMS Terror – the famous ships that set sail from England in 1845 in search of a Northwest Passage across what is now Canada’s Arctic. After getting stuck in sea ice, 129 crew members were forced to abandon ship in 1848, leaving the ships remaining as some of Canada’s greatest pieces of history.

HMS Terror was constructed by the Royal Navy in 1813 as a warship. Following the War of 1812, the Terror was converted into a polar exploration ship along with the HMS Erebus. Both ships had become icebound and were abandoned by their crews during Sir John Franklin’s ill-fated attempt to force the Northwest Passage in 1845.

Over several days, the interior spaces of the wreck of HMS Terror were scientifically explored for the first time. Parks Canada’s Underwater Archaeology Team conducted seven dives with the DTG3 and explored 20 cabins and compartments on the ship. The ROV provided live 4K footage to the team at surface and provided divers with an extra set of eyes in confined spaces of the frigid Arctic waters.

Before searching for the HMS Terror in 2019, Deep Trekker partnered with Parks Canada in 2016 to search for HMS Terror’s partner vessel, the HMS Erebus.

Built in 1826 by the Royal Navy, the HMS Erebus was originally intended to be a bomb vessel. After being retrofitted as an exploration vessel for Antarctic service the HMS Erebus was abandoned along with the HMS Terror in the Franklin Expedition.

The Scottish whaling vessel Nova Zembla, believed to be the first ever British whaling wreckage in Canada’s High Arctic, wrecked in a fjord off Baffin Bay on Thursday, September 18th, 1902. The crew was rescued by fellow whalers, the Diana and Eclipse (in fact it is their log books that have provided significant information about the events of that night).

In 2018 Deep Trekker joined the University of Calgary’s Arctic Institute of North America and the Royal Canadian Geographical Society in a mission to discover the wreckage of the famous ship. On August 31 of 2018 the wreckage was found using the DTG2 equipped with sonar.

The discovery of the ship offered significant historical insight into life in an industry that dominated Canadian waters for centuries. There are very limited accounts of the daily lives of the whalers and sailors that plied the treacherous waters of the Arctic and contributed to the geographical understanding of the region. Furthermore, the wreck works to provide a benchmark for understanding the timeline of ecological growth in the region which is useful to determine the impact of climate change on the region.

Read more about the discovery in Canadian Geographic.

In 2017 the Deep Trekker team was thrilled to spend time searching Lake Ontario for the Avro Arrow. A conspiracy-filled, mysterious piece of Canadian history, the Arrow has remained elusive for years. The Deep Trekker team was able to showcase the abilities of the DTG2 with it's newly integrated sonar system in the search for the Arrow. Being able to be a part of Canadian history was exciting enough, but when the team started to get direct hits and videos of actual pieces of the Arrow, it became the experience of a lifetime.

In 2017 the Clipperton Expedition invited Deep Trekker to participate in their mission with the use of their DTG2 ROV. Working with volunteers to tag black fin sharks, observe migration and catalog different species of fish, the DTG2 helped to document human impact and the evolution of the ecosystem on the remote island of Ile de la Passion, a French Overseas Territory. Using this vital information the team was able to identify potential threats to better preserve this vital resource and determine shark migratory patterns and prove connectivity with important shark sanctuaries.

The atoll is considered to be the most isolated on the planet. A special authorization is even required to set foot on the atoll as well as to enter a 12- nautical-mile zone around it. Geared with a Deep Trekker ROV, the crew journeyed to the atoll to complete their critical environmental research and shark tagging. The Clipperton Expedition and the DTG2 were also featured on Discovery Channel’s Shark Week - always a highlight for the Deep Trekker team.

Trade shows are essential to Deep Trekker, there is no better way to explain how the unique pitching system works than in our 200-gallon water tank. We do more than 50 trade shows a year, but we never forget our first, the Fort Lauderdale International Boat Show. Seeing people’s faces light up when they thought of all the dive sites they could see, the fish they could find and the repairs they could investigate on their hull was an exhilarating feeling.

From that first shipment, to still the ones that leave our doors daily, the people that use Deep Trekker underwater robots have made us who we are today. We are so thankful for the last 10 years of Deep Trekker and can’t wait to see where the next 10 take us!

Our ROVs have been used for a number of exciting applications over the last 10...

As we celebrate our first decade of Deep Trekker we’re looking back at just how...