Salmon are a major source of protein for many people across the world and especially here in Canada. It is one of the most farmed species in the nation with large net pen farms on the east and west coasts.

We have been fortunate to visit a number of salmon farms in Canada and other countries such as Ireland and Chile. Something that never changes is the way these fish behave on the farms. One of the most noticeable phenomena on a salmon farm is when the fish “jump” out of the water.

Why Do Salmon Jump?

What do we mean by "jump"? How can fish jump when they don’t have legs? Well take a look at a photo we snapped at a Marine Harvest farm in Campbell River, BC to see what we're talking about. 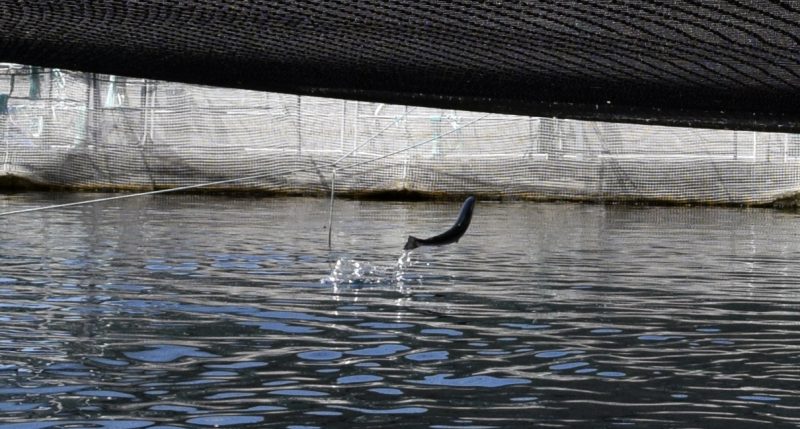 See! The fish doesn’t just dive out of the water for a second but actually appears to have “jumped” out. This is a very common occurrence among salmon. However the real reason as to why the fish jump is unknown and debated by many. Some explain that salmon jump to clean their gills and scales. Others believe it has to do with hormonal changes in the fish.

From a farmer’s perspective, the reason that salmon jump may remain ambiguous. The fact that they do is important. Farmers are able to use this characteristic to determine if something is wrong with their stock.

An absence of jumping may be one of the biggest indicators that the fish need attention. If the fish are not active, then it generally means they are unhappy. The lack of activity can indicate a few different things. It is possible the oxygen in the water may be low, or the feed is not being distributed properly, or that predators are nearby.

Once a farm manager notices that their salmon are no longer jumping, they can do a number of observations, checks and tests to assess what is making the salmon unhappy and/or behave out of the ordinary.

﻿Use ROVs to examine conditions affecting fish welfare on your farm

One major lesson that Deep Trekker has learned during our visits to these farms is the importance of monitoring fish behavior. A number of our aquaculture customers explain that they use their ROV on the farm every day to do a quick check of the pens and stock to ensure that the salmon are able to jump and school properly.

With an ROV like Deep Trekker's DTG3 system, farmers can do these daily checks (among many other tasks) to ensure peace of mind and keep their operations running smoothly.

Click here to watch some videos about Deep Trekker ROVs and the Aquaculture Industry.