We're sharing the way that our ROVs are being used in the inspection and maintenance of structural assets.

Want to know a bit more about our history? Click here to watch our story.

So, what do these vehicles do exactly? 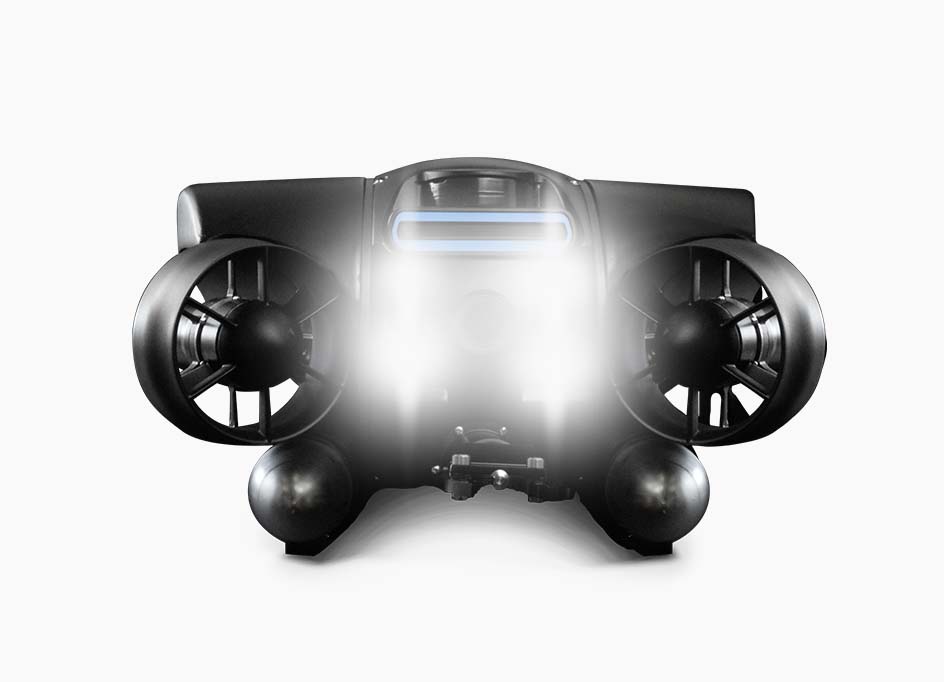 The REVOLUTION ROV is a swimming camera that can have all sorts of other tools. It's powerful and stable in the water and has great stability features for when in current. It's battery powered and operated from a handheld controller for ease of use and portability sake. 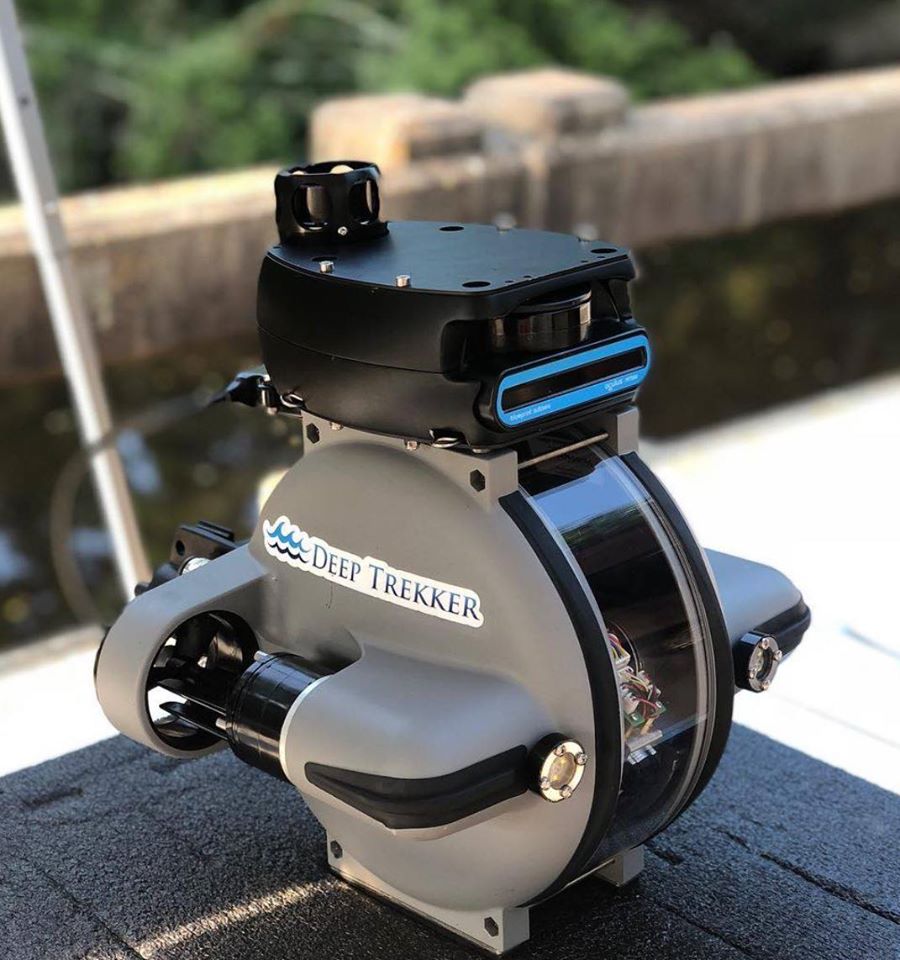 The DTG3 is Deep Trekker's smaller ROV. It's about the size of a basketball, and is super portable and maneuverable. Everything you need fits in one case and operates from that same handheld controller. 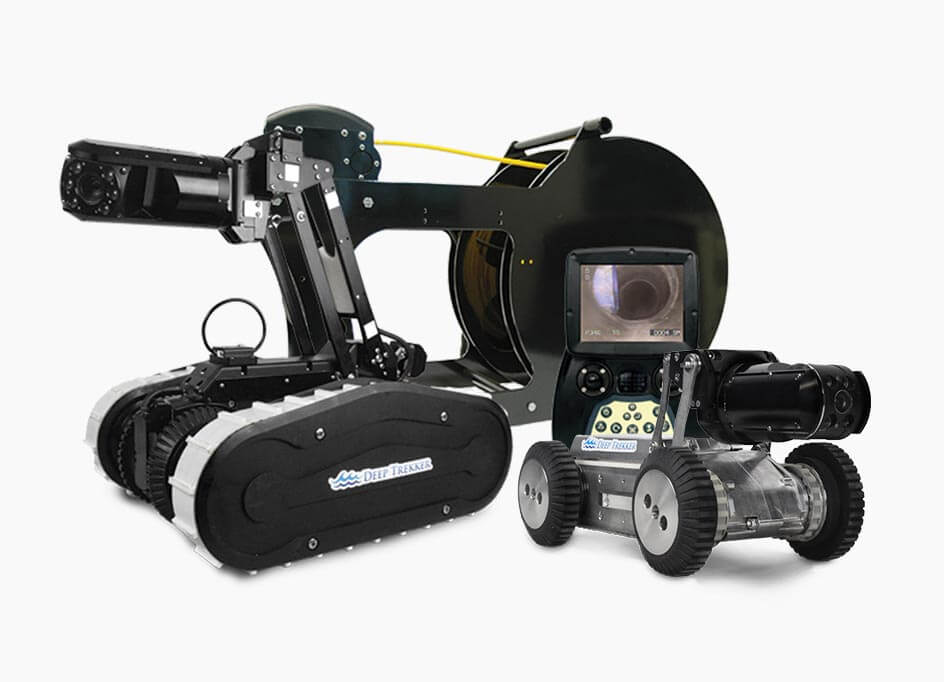 Shown above are the DT340 and DT320 Pipe Crawlers. These are unique in that they are battery powered and fully submersible - most pipe crawlers are operated from vans or trucks, which makes them really difficult to get to access points. 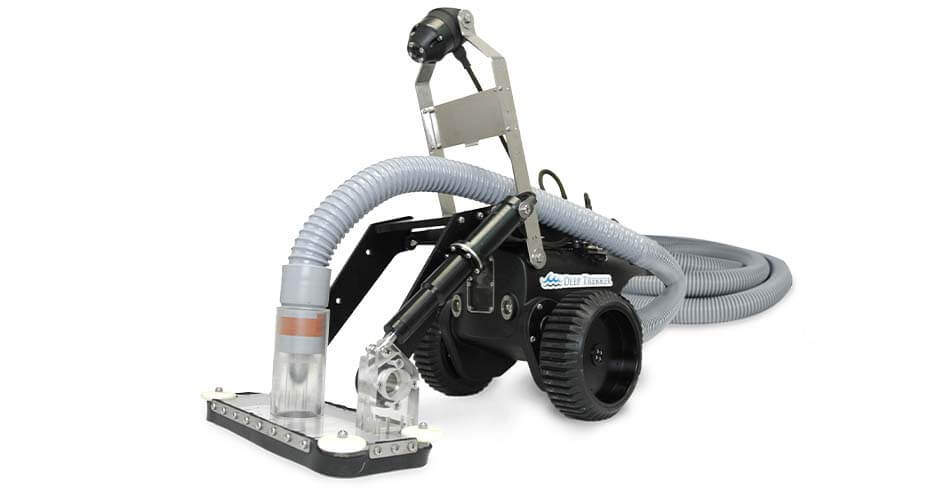 This picture showcases the DT640 Vacuum Crawler which comes in a multiple configurations - from 36 inches wide to as small as 14 inches wide. It’s a portable and easy way to clean water storage tanks without needing to drain or call in divers. 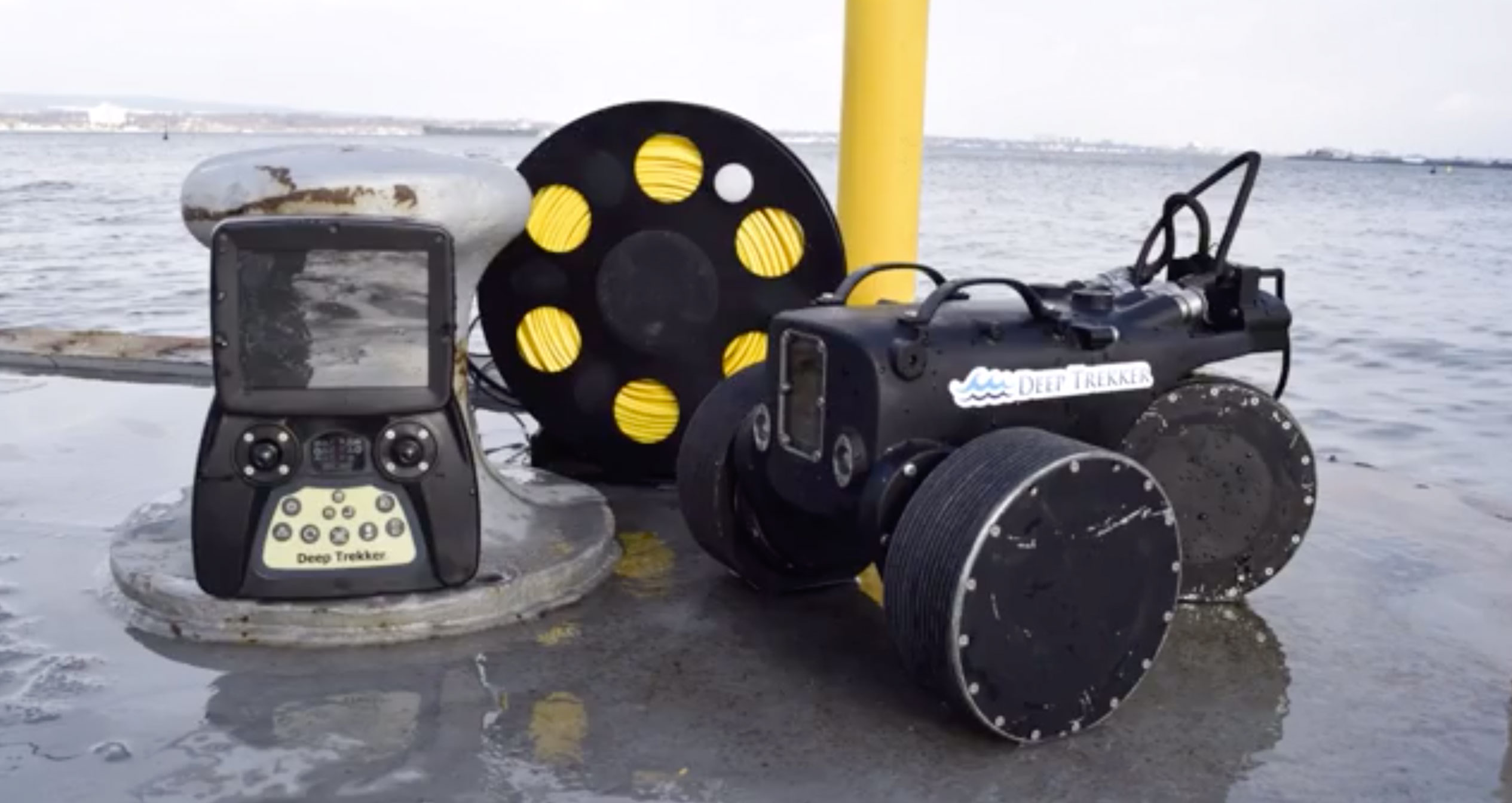 Last is the DT640 magentic utility crawler. This crawler has magnetic wheels to allow it to drive along steel surfaces like vertical steel pipes or ship hulls to perform inspections and nondestructive testing.

All of our vehicles play a similar role in that they make these inspection and cleaning jobs safer and more cost effective. All of our systems are well known for their durability and intuitive design across a wide variety of applications.

How are these robots being used in nuclear energy? One of our local customers is Ontario Power Generation. Click here for the full case study.

OPG has two power stations here in Southwestern Ontario. They use Deep Trekker ROVs for inspections of a variety of structures. We recently hosted a panel discussion with Che Swearengen, the Frontline Manager and Dive Supervisor from OPG, and he talked about the inspection of an injection water service tank.

According to Che, the primary benefits of using the ROV was that it limited radiation dosage. The team didn't have to enact work protection, and by doing this, it reduced their operational and labor costs significantly. Furthermore, they got the same result that they would have from a dive team.

Another interesting way they used the ROV was for an end-shield inspection where they actually rigged the ROV to seal a leak. The team was able to apply sealant using the ROV with the grabber to the bottom of the unit without having to bring in divers. And, in this particular case, it would have been too risky to send in humans to do this task.

Another valued customer of ours is Exelon. We work with several of their nuclear sites, including one in Braidwood, Illinois. During our initial sale to this plant, we did an in-person training as well as supervision during an inspection of their traveling screens. These screens are a particularly tricky area to inspect due to their turbidity, high current and difficult access.

Typically, they estimate the cost to perform these inspections using traditional dive methods, to amount to hundreds of thousands of dollars each time they perform this inspection. Since implementing the REVOLUTION ROVs as part of their inspection program, they got these same results safer, and they estimate that they've saved millions in the process.

Outside of nuclear, we also work a lot with hydroelectric dams.

So how are they being used in hydro? One example of a customer is Eugene Oregon's Water and Electric Board. Learn more about their application.Part of the assets they manage are hydroelectric dam facilities, as well as drinking water treatment and distribution structures. They use the ROV to evaluate the build-up of debris on trash racks and optimize when to call in divers to clear the debris. They were also able to quickly identify debris that caused stoplogs to not be able to create a watertight seal, allowing them to remove that debris and fix the problem. Without the ROV, they would not have been able to do this.

OPG also conducted a runner inspection at Chats Falls. This was another example of where an ROV was able to go and do an inspection in an area that just was too risky to send divers. The goal of the inspection was just to look for material loss, runner gaps and anomalies at the turbine in the cavitation rooms. The portability and the ease of deployment allowed OPG to reduce their costs, reduce their crew size and make operations safer in the process.

Other industries that we also work in are Petrochemical, Industrial and Municipal Infrastructure. These industries make use of water storage tanks, pipes and other water retaining assets that need to be inspected on a regular basis.

OLC Services, out of Houston, Texas, is a small company that offers services to companies such as Exelon Mobil. OLC uses utilize our DTG3 ROVs to inspect cooling towers and our DT640 Vacuum Crawlers to clean sediment out of them.

While they are doing this, they're able to keep their tower online and in service, so they don't need to shut down power production. They don't have to go offline at all and don't have to use dangerous, confined space entry or dive employees. They're able to do this very safely from the top of the tower. One other feature about its cooling towers, in particular, is that the temperature of these towers is quite high and they are also quite high in terms of their structure. They're typically about one hundred feet high.

So, having portable equipment, where you don't need a generator, makes it a lot easier to get up and down these structures. Additionally, being able to put a small device that doesn't generate a lot of heat into these high temperatures means that you don't have to worry about overheating nearly as much as you would with something that requires generator power.

One of the main reasons, that they're offering this type of service, this ongoing cleaning service, is that it's a much lower cost than traditional methods, which means that they can then do it more regularly. These vehicles are best when there is two or three inches of sediment or less. So what companies are doing now, is they're offering an ongoing service program where they're able to come in every year or two and perform this cleaning and it greatly reduces risks of things like Legionnaires developing for example. If there's too much buildup of sediment, then you can get the aerosol that comes out of that and it is really risky for any operators near the tower.

By having these regular services done, you also have a much better understanding of the lifespan of the asset overall. You understand, if you can extend the life of this tower by 10, 20 years, that's worth a lot to you. So really, what we're finding is the end customers are willing to invest in having a regular service, because the cost is more reasonable at this point.

One last example is another branch of Exelon, the Robotic Services Division, Exelon Clearsight. This group is extremely innovative in their approaches to structural inspections and have a fleet of various robotics.

They recently posted this case study, and it was an inspection of a fire protection tank for a natural gas power plant. They used the REVOLUTION ROV to check the standpipe, the penetrations, the walls, the support column, as well as measure sediment levels in the tank. In doing this, they said that they saved tens of thousands of dollars that would have been spent on divers.

We hope that that gives you a good understanding of what Deep Trekker does and how our customers are using ROVs for submerged structual inspections.