Unless you are swimming off the coast of Cancun, your nearest water source may not always be incredibly clear. Visibility below the surface often limits the ability of search and rescue missions or shipwreck discovery teams. However, they still need to dive under the surface and do their jobs. For this reason, these organizations outfit themselves with sonar equipment to provide better points of reference prior to jumping in murky water.

Understanding the Types of Sonar

Conventional sonar systems were monotonic which offered a very limited picture for object identification. In order to receive a respectable image through water, the transmission pulse must be relatively long. The traditional system generated a visual range of 37.5mm; this result would determine the separation between targets. If objects were less than 37.5mm apart, they would be recorded as one item rather than displaying them as two smaller targets. Fortunately, technology has improved underwater sonars to provide object detection and image clarity.

An alternative to conventional radar using a single frequency burst is Compressed High-Intensity Radar Pulse (CHIRP). This type of sonar sends a burst which is swept over a broad range throughout the transmission pulse and creates a signature pulse so the sonar understands what was transmitted and when. CHIRP generates a new range resolution of 7.5mm; greatly improving its ability to identify two separate targets. Additionally, it has the ability to reduce background noise and remove random chatter to give a clearer image.

A single sweep scanning sonar, such as a Micron, will give a 360-degree field of view of an area; providing a basic depiction for target identification. Objects would appear as distinct images and once recognized, the operator is able to dive toward the location to physically identify the target. This option offers a simple solution for distinguishing objects and obstacle avoidance in a low visibility environment.

In cases where a clearer image is required such as search and rescue missions, salvage operations, and subsea monitoring, operators turn to a multibeam sonar such as Tritech’s Gemini 720ik. This system emits 512 beams 30 times a second which provides real-time, high-frequency imagery. With its rapid updated speed, this makes the multibeam sonar the ideal tool for object identification.

In this example, the multibeam sonar is able to clearly outline the frame of an airplane resting on the ocean floor. 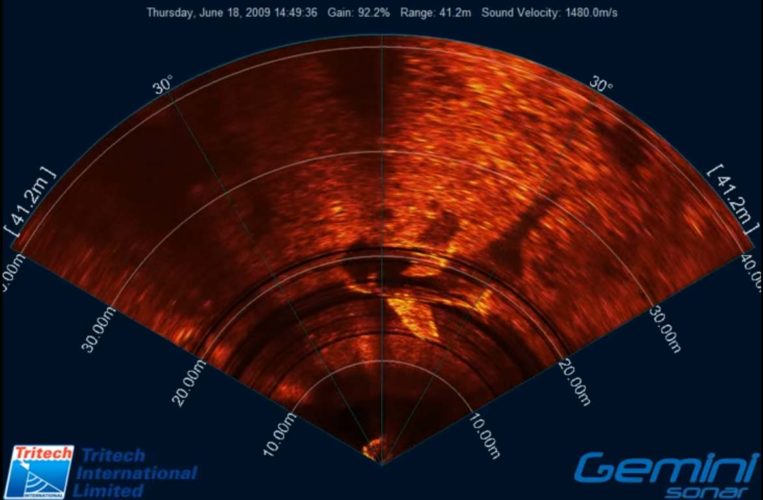 The compact design of both the Micron single sweep and Gemini multibeam sonars allow them to be outfitted to any Deep Trekker Remotely Operated Vehicles (DTG3 Underwater Drone DTX2). These underwater drones are built for low visibility. They are equipped with a 0.01 Lux camera which can operate in low light environments and are the go-to option for many aquatic missions.

With the Micron single beam scanner mounted on the underwater drone, an operator is able to navigate through low visibility waters. This tool paints a basic view of what is surrounding the ROV. Once an area of interest is identified, the unit can be guided towards the object to inspect. The ROV sends a live video feed to the handheld controller on the surface providing the benefit of immediate identification. 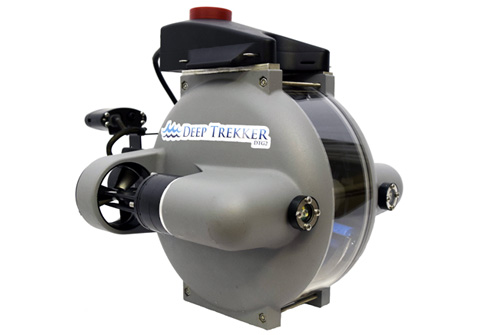 The larger Deep Trekker ROV, DTG3, can be fixed with a multibeam sonar. To reiterate, the Gemini 720ik provides a comprehensible image making it the ideal add-on for search, rescue and salvage missions. Once a target has been identified and located, the ROV has the capability of grabbing hold of the object using its Two-Function manipulator. If the item is too large to retrieve with the unit, divers are able to follow the ROV’s tether right to the target. Moreover, the underwater drone is able to do a visual sweep of the area to ensure that the area is safe for a human diver.

If your next aquatic mission takes you into some low-visibility waters, being fitted with the right sonar system will make a significant difference when navigating through it. Be prepared for your next mission in murky waters, contact Deep Trekker to outfit your ROV with sonar.

Visit the Tritech website for more information on their sonar systems.

REVOLUTION ROV with step by step instructions. Learn what comes in a box to understanding the controller functions and menus, and...

We were thrilled to speak to William Jensen of Industrial Inspection & Analysis Nuclear Services to learn more about how the IIA team uses their DTG3...