Below the Surface of Canadian Salmon Farms

As we gear up to attend AquaNor this August in Trondheim we thought we would share with you an editorial about the use of our ROVs on Canadian Salmon Farms. Check it out to learn a bit more about Canadian aquaculture and how some of the challenges that arise are mitigated with the use of a Deep Trekker ROV! For everyone attending AquaNor be sure to stop by our booth at E-448 to say hello and pilot our ROV in our 200 gallon test tank.

Below the Surface of Canadian Salmon Farms- A World of Possibilities

A rising concern in today’s world with the rapidly increasing global population is the need to feed everyone without over hunting and fishing the world’s resources. The effects of overfishing tell a narrative similar to that of the American Bison where zero restrictions on hunting led to the extinction of the species. This example should act as a warning to the world about the delicacy of the earth’s resources and offers a highly relevant lesson to the world’s fishing population. With the amount that humans consume today, it is predicted that if the situation does not change then in 50 years all of the fish in the ocean could be gone[1]. The improvement of technologies and rising populations have led to a decline in the number of fish populations due to over fishing. Wild salmon are no exception to this pattern. For companies like Marine Harvest, who operate numerous salmon farms within Canada, the threat of species extinction is one of the main reasons that motivate them to farm fish like the Atlantic salmon. Commercial salmon farming began in British Columbia, Canada in the 1970s[2], and Marine Harvest is one of the most prominent players in the area with operations taking place all around the world and between 30 and 35 farms operating in British Columbia alone at one time. In total they produce approximately one fifth of the world’s farm raised salmon and trout. As the presence of fish farms gain prominence, the need to frequently inspect and monitor these farms are highly important to ensure both the health of the fish and the surrounding ecosystems. Tools such as remotely operated vehicles (ROVs) and other underwater cameras have given farmers the ability to see below the surface of water from the comfort of land. 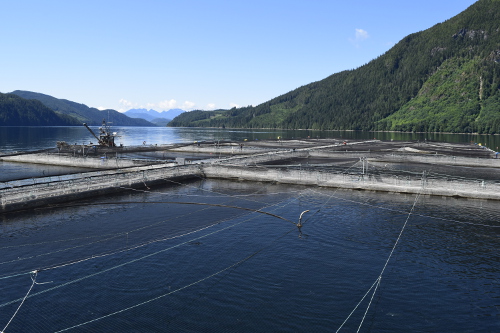 The Canadian fish farming industry has changed drastically within the past two decades. Ian Roberts from Marine Harvest Canada has been in the fish farming business since 1992 and has experienced firsthand the changes that have occurred as time has progressed. When Ian began working with salmon farming everyone working at the farms were responsible for performing a wide range of activities. He described the roles that he performed when he first started in the industry which include everything from feeding to cleaning to performing dives himself. In the early nineteen-nineties, employees of a fish farm were able to perform their own dives with limited certification to complete net inspections, net-washing, anchoring, size grading, smolt deliveries and so much more. During this period, the farmers who are considered experts in the field and running a fish farm, were also the ones who were going below the surface to monitor the day to day activities of the fish and the infrastructure. During this period there was no gap between those who know the ins and outs of fish farming and those who were diving below the water because the farmers themselves could travel below the surface. Today this is not the case.

In the mid 1900’s the regulations changed and now all divers who work on Marine Harvest farms are required to be commercially certified. This is what began the knowledge gap between the farmers who know the farms and the divers who complete work to maintain the submerged infrastructure. Today with this regulation, most fish farms are required to hire a dive team to perform all underwater tasks rather than keep commercial divers on staff full time. Though professionally trained in diving, these divers are not experienced in fish farming and may not be reporting all information to the farm managers because they may think it is irrelevant. Ian explained that in today’s world, someone can hold the role of an assistant manager without ever having seen the farm from under the surface.

As Gerry Burry, Site Manager at Marine Harvest’s Quatsino operating area explains “farms are like an iceberg. A person can only see about ten per cent of the farm that is floating on the surface, leaving the rest of the infrastructure underwater and out of sight”. Considering that only ten percent of fish farm activity takes place above the surface of the water, this knowledge gap can have significant effects on the operation of the farm. 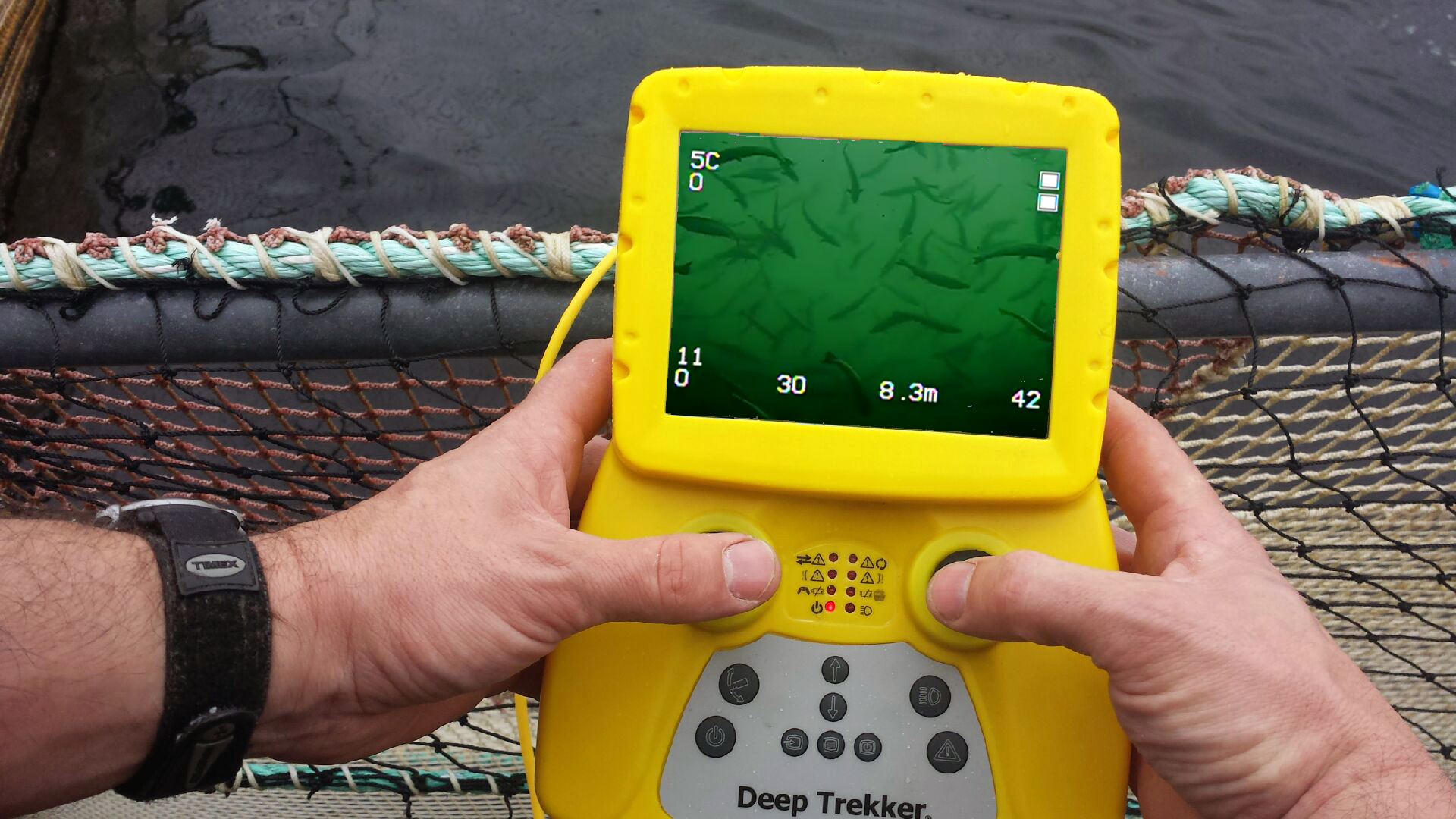 The regulations of commercially certified divers working in farms has significantly increased the safety of both divers and employees. The downfall to this is farmers trusting people who are “untrained in the field” to take care of their farms. Commercial divers are also required to work in teams of three which can result in high manpower costs. Combine this with the need to constantly have eyes under the surface and it is easy to see how divers have been labelled as one of the most expensive employees that a fish farmer must hire. With the high cost and discrepancies in knowledge between farmers and divers, farmers have begun to explore other options to perform the basic duties of maintaining their farms.

To bridge this gap in farming expertise and reduce diving costs, Marine Harvest has invested in the Deep Trekker DTG2 ROVs to act as their remote divers for an efficient view of their farms and submerged infrastructure. Deep Trekker offers fully portable and easily maneuverable robotic underwater cameras in the form of an ROV. Ian Roberts explained that the units have been a huge asset to the fish farms, allowing the farmers to perform their own inspections in as much detail as they need without worrying that a diver would miss an important observation.

There are a number of different reasons why a fish farmer needs to have eyes under the water. Even though they cannot perform certain tasks themselves the farmers can use the DTG2 ROV to ensure that the divers they are hiring are performing their tasks up to the proper standards as well as perform routine inspections that they otherwise would have to hire divers to perform. 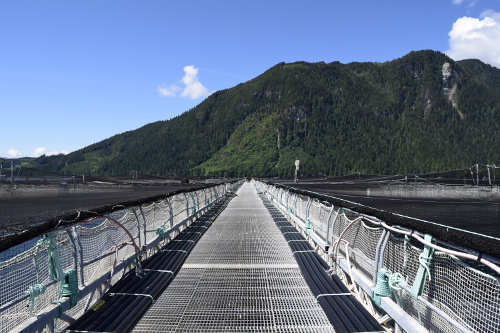 An important part of salmon farming is transferring small salmon (called “smolts”) from freshwater to saltwater. This process mimics the natural lifecycle of a salmon. Farmers need to check on the smolts every couple of days to ensure that they are growing properly. Initially Marine Harvest used to hire divers every few days to check on the smolts throughout periods of high vulnerability, and closely monitor survival. Today Marine Harvest produces their own smolts but must still check the status of them every couple of days.

With the use of the DTG2 ROV, fish farmers around the world are able to do their own smolt inspections, use the optional mort retrieval bracket, and only bring in divers if they see a need to have hands under the water.

Smolt introduction is only one aspect of fish farming that happens in the day to day operations of a fish farm. Farmers also need to do net inspections, net anchoring, size grading, lift up system inspections as well as monitor general fish behaviour.

Why examine general fish behaviour? A lot can be told from the way the fish are acting. One of the main characteristics of salmon in fish farms is that they swim close to the surface and “jump” out of the water. What can be inferred is that if the fish are not jumping then they are not happy. This could mean a few different things; if the fish cannot be seen at the surface then a farmer in most cases would want to check to make sure that the salmon are still schooling properly. If they are swimming close to the edge of the cage it can mean that the oxygen levels in the water are low. 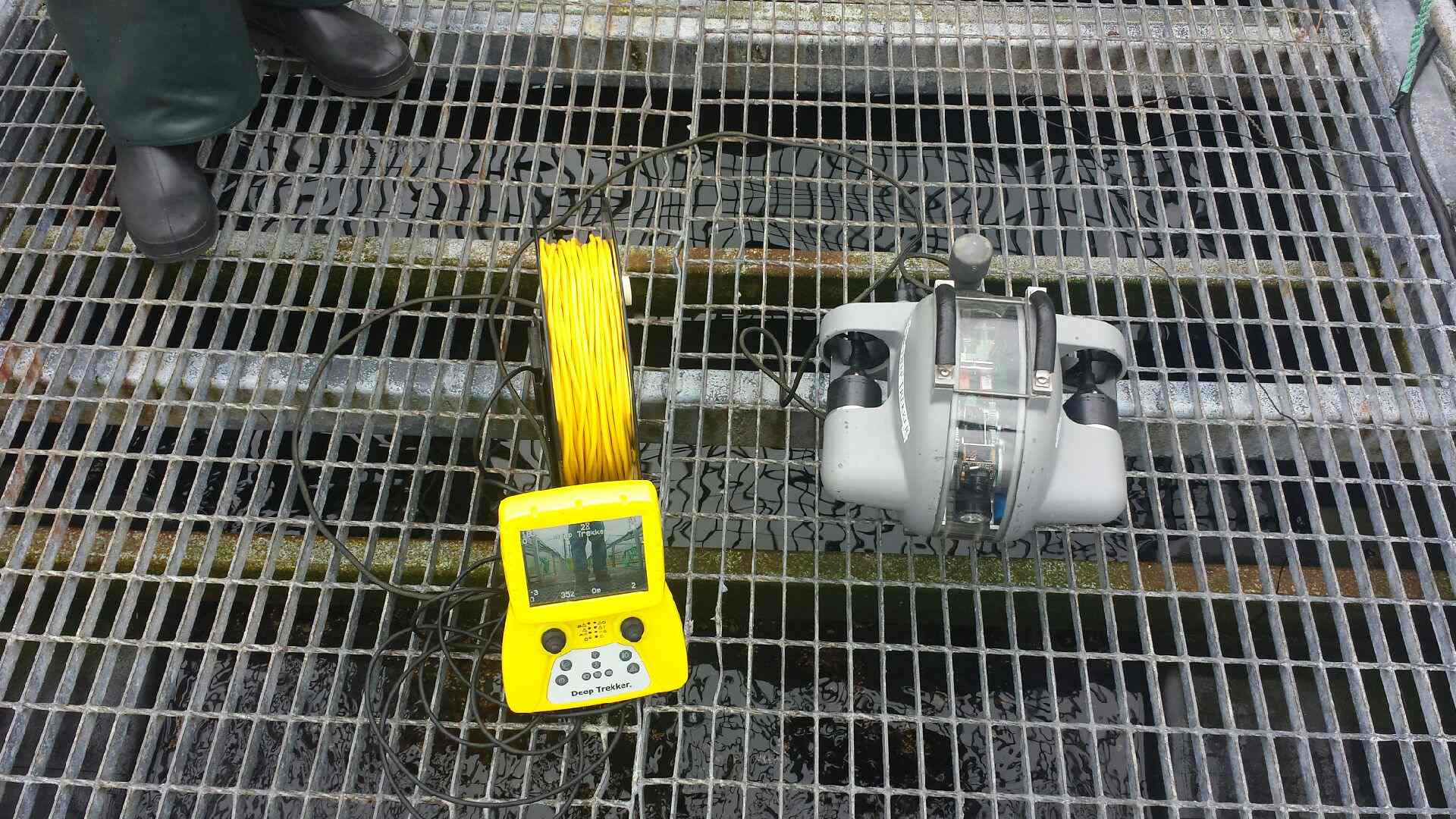 Without a remotely operated vehicle, a farmer must send a diver down to check on the fish when they are swimming too low. Meaning, a farmer must first purchase the service and then must take on the task of making sure the diver understands what different fish behaviours mean so that they can gain an accurate insight as to why the fish are unhappy. Divers are highly experienced in what they do but it makes sense that they do not have as extensive a knowledge on fish behaviour that the farmers do. By using the DTG2 ROV, Marine Harvest farmers have been able to monitor all of these aspects without the need to hire a diver unless they deem it necessary.

Fish feeding is another major component to fish farming that has been improved by the use of the DTG2 ROV. Though there are cameras set up at the feeding sites, there is little flexibility among them and farmers are unable to see if there is a large population of their fish swimming below the feed cameras who are not feeding properly. Having the ROV to swim down and see the percentage of fish that are above the feed camera is able to help the farmer assess if they need to alter their systems or investigate the low swimming fish further. 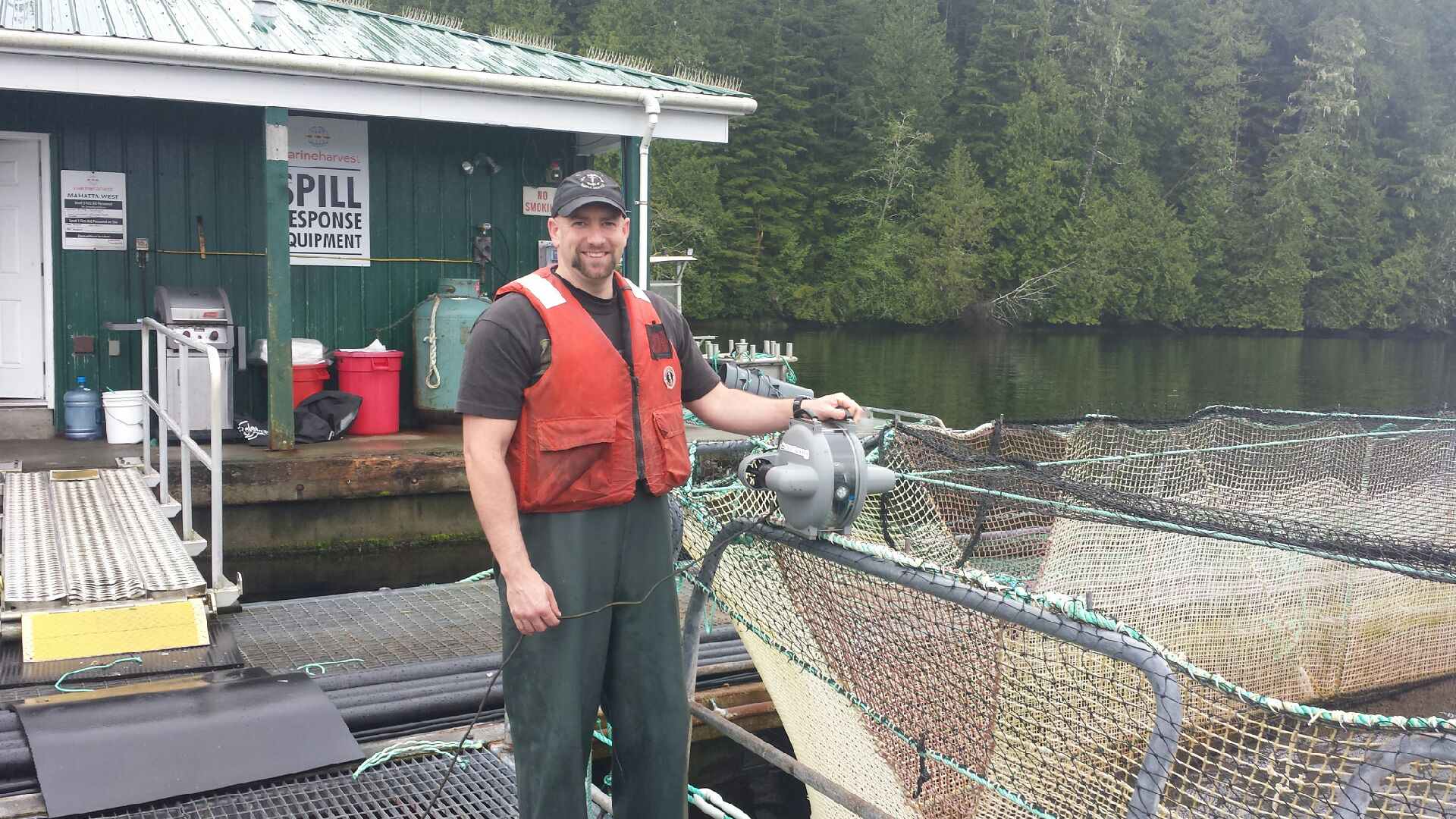 Fish farms are a huge part of the salmon market in BC. Marine Harvest operates a large portion of the industry and uses nets that can reach a size of 35 meters x 35 meters x 30 meters. Regular net inspections – a requirement included in the Province’s aquaculture licence – can prove to be a huge job for divers and the use of the DTG2 ROV has improved efficiency and saved the company money since the day ROV inspections were implemented.

Similarly to how salmon farming methods have evolved, ROVs continue to improve as well. Deep Trekker is constantly working to provide quality products with unique add-ons and smart technology in order to create systems that can fit a number of different needs within various industries. The possibilities are endless with a Deep Trekker ROV to ensure smooth operations and inspections of submerged assets such as fish farms around the world.

The total annual aquaculture production contributes to 45% of the world’s...