HomeNewsAll You Need to Know About Hydroelectric Inspection with ROVs

All You Need to Know About Hydroelectric Inspection with ROVs

What is a Hydroelectric Plant?

Hydroelectric plants are typically owned by Governments or large private corporations and tasked with converting kinetic energy from falling water into electricity to power our homes and cities. As the world’s most widely used method of sustainable energy, hydropower accounts for 17% of global electricity generation. With approximately two-thirds of the economically feasible potential remaining to be developed, the opportunity for sustainable hydroelectric growth is substantial. (source).

The main components of a hydroelectric plant are:

Areas to Examine in a Hydro Dam Inspection 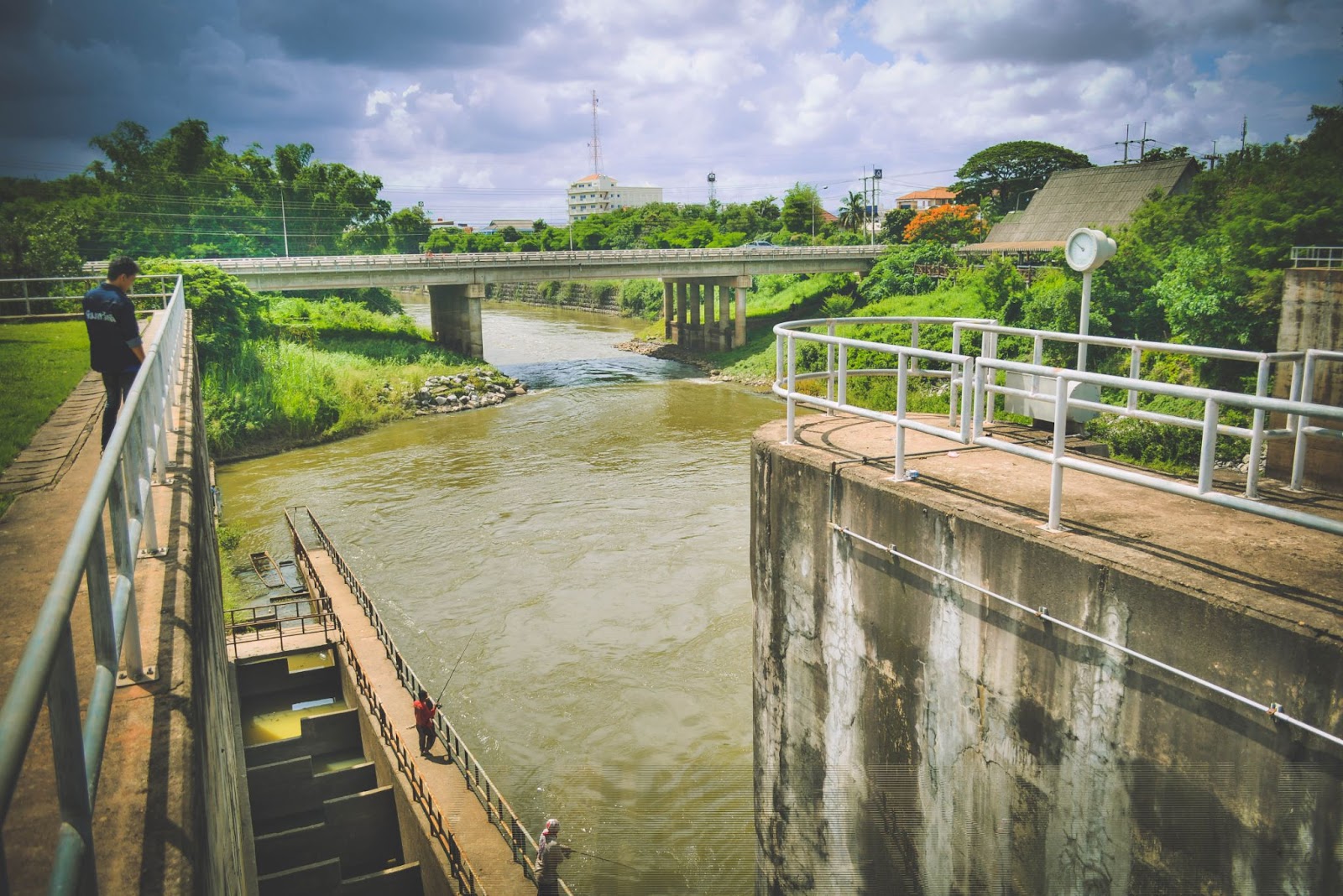 Hydropower plants can vary dramatically in size, from tiny single-home systems, all the way to monstrous dams to power cities like the Hoover Dam in Nevada, USA. Since there is no specific regulatory framework, each dam / owner has their own guidelines based on the expected asset lifespan and previous inspections. Larger structures will require more in-depth inspections and regular maintenance due to the severity of a system failure, however most plants will want to inspect these same assets:

A reservoir is where water is retained before entering the hydropower plant for electricity creation. The dam allows for a natural lake to be enlarged, or aid in the creation of an artificial lake. Reservoirs should be routinely inspected for the integrity of the overall structure, ensure there are no leaks, and also investigate the condition of the equipment under the water; such as pipes, ladders, and valves. The lake bed can also be inspected to monitor sediment levels and ensure overall water quality.

For more information about reservoir inspections, check out our full article here.

Objects like logs and garbage can commonly enter reservoirs around the edges of a dam. Structures called trash racks are in place to "catch" this debris before it reaches the intake. The trash racks collect moderate to large debris that is flowing through the river. If unattended, this debris can build up on the racks and cause flow blockage. Regular surveys allow for minor blockages to be caught and cleared to avoid overflowing.

Intake structures are used for collecting and directing water from the reservoir into the turbines. In order to enter the intake, water must pass through a control gate. Control gates prevent any objects that made it past the trash racks from entering the intake and causing damage to the turbine. Both the intake structure and control gate need to be inspected regularly for blockages (which can reduce flow and electrical output) and for their overall condition.

If the gate or bolts holding the gate in place are damaged or corroded, it is much more cost efficient to perform preventative maintenance than to reel from the issues of a gate failure. Additionally, it is integral to inspect the vertical barrier screens to ensure that fish are protected. The screens protect juvenile fish from going through the power house, and instead directs the fish to a collection channel where they are sent to a juvenile fish facility.

For more information about intake maintenance, check out our full article here.

Arguably the most important underwater asset in a hydroelectric plant, the turbines are responsible for the initial generation of energy. Any damage to the blades can have negative impacts on electrical production. This damage could be caused by loose objects, erosion, or cavitation (small vapor-filled cavities). Routine inspection and maintenance is the key to unlocking optimal production and avoiding system failures.

Penstocks are long, angled pipes that carry water from the main intake structure down to outfall or discharge of the dam. If the penstock has a blockage or failure, the dam can become backed up. This can reduce overall efficiencies and may have environmental impacts from the resulting overflow.

Why is it Important to Examine Hydropower Plants? 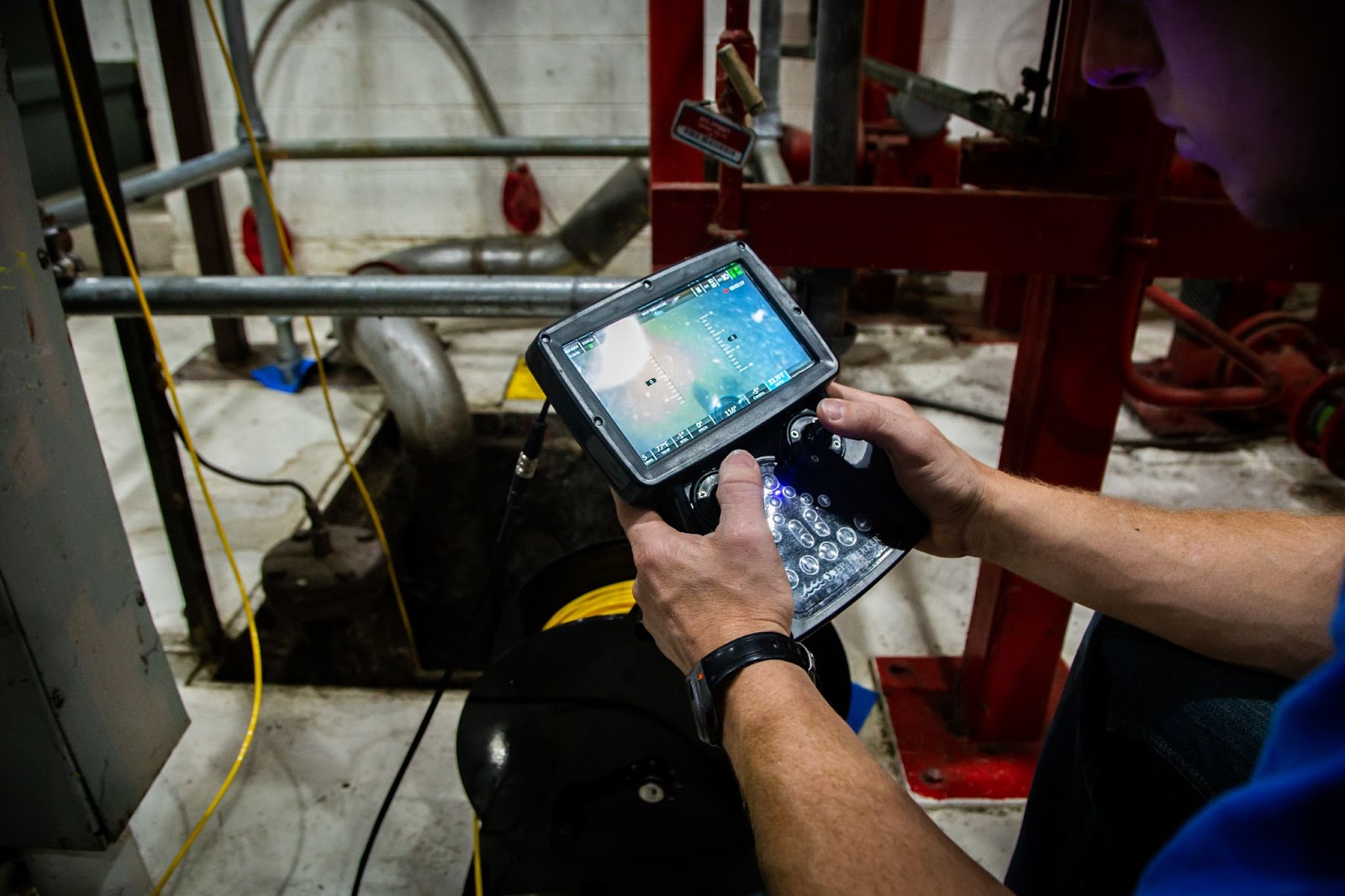 The inspection of hydro dams and power plants is integral for the prevention of system failures or inefficient energy production. By maintaining a consistent awareness of submerged assets and infrastructure, governments or private organizations can effectively forecast maintenance to avoid catastrophes.

Successful forecasting optimizes spending and allows for budgets to be confidently allocated for projects related to growth. According to the International Renewable Energy Agency (IRENA), the world’s hydropower capacity must grow by 60% by 2050 to meet the criteria for mitigating climate change, making effective growth plans vital within the hydro industry (source).

Damages and blockages may not always lead to critical errors, however in many instances, minor imperfections can lead to inefficient production. After a recent interview, Jon Thomas of the Eugene Water and Electrical Board (EWEB) stated that their team used ROV inspections to identify the accumulation of debris on the intake trash racks. This allowed them to optimize the use of hired divers for clearing obstructions to always ensure proper water flow.

On another occasion, Thomas and his team noticed that the stoplogs were unable to create a watertight seal, leaving the crew unable to control the water as they needed. After inspection, they could see the debris that hindered the beams’ ability to create a seal was quickly located and removed, allowing the team to continue on with minimal downtime.

What are the Advantages of Using ROVs in Hydroelectric Inspections? 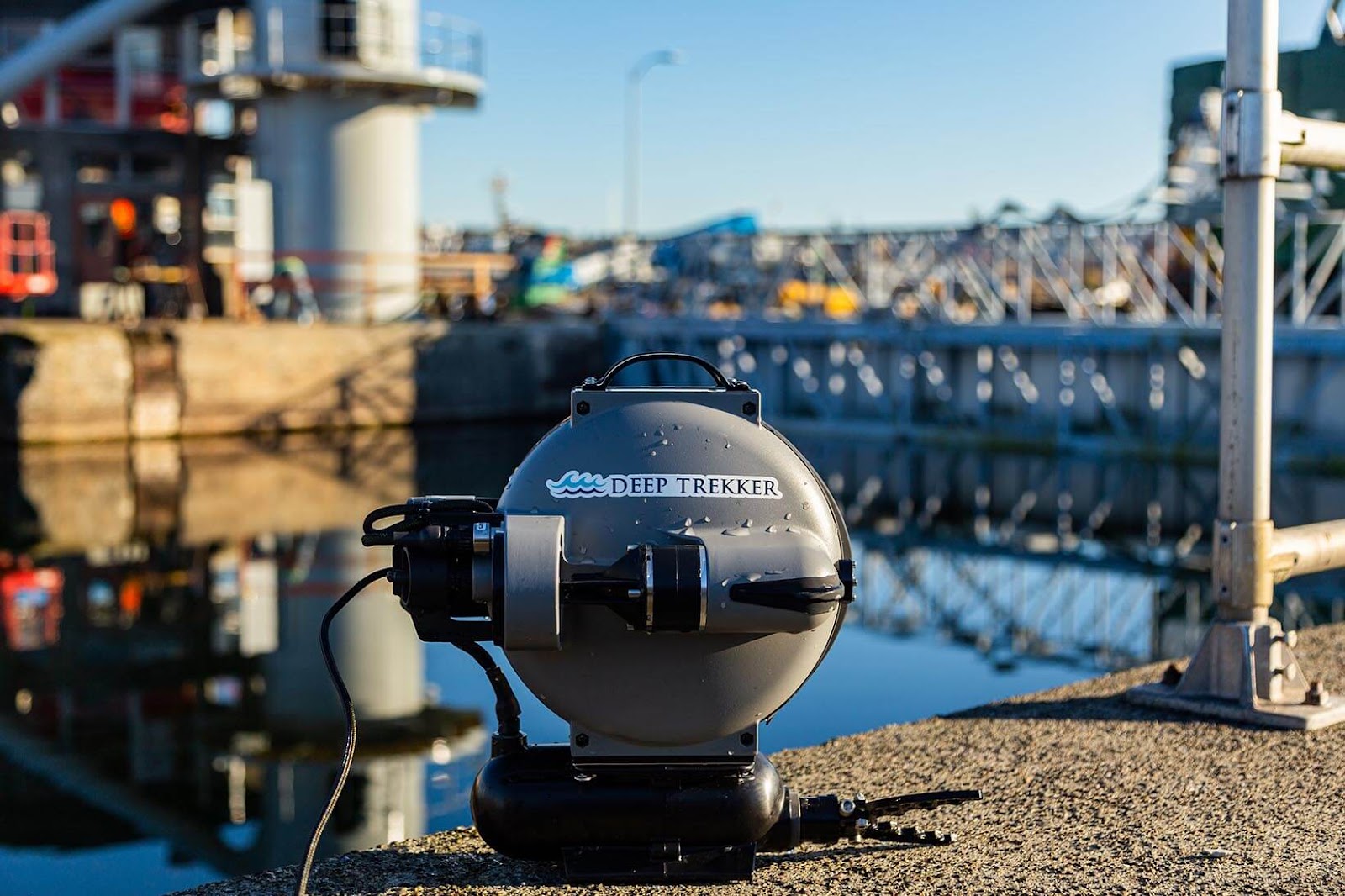 Utilizing topside operation, ROVs’ compact yet rugged design allows them to navigate through complex confined spaces without putting any humans at risk. In some cases, ROVs can actually be equipped with modular addons to complete minor tasks, however larger projects may require human intervention. Although entering the water can not always be avoided, generating a clear visual understanding of the task before deploying drastically limits the required time underwater.

If inspection or maintenance further requires humans to enter the water, an ROV is an effective tool for planning dive routes or performing pre-dive checks. Having an ROV scan the area for potential dangers, identify the target, or even latch onto an object to provide a tether route increases the chance of a smooth mission. Alternatively, an ROV can also quickly be deployed alongside a diver to monitor their status as a method of communication with the topside team.

Without any safety concerns related to divers, operations can usually continue as normal during an ROV inspection. Removing this operational downtime ensures a continuous flow of energy production for a more efficient plant.

ROVs are equipped with high definition cameras and powerful LED lighting to produce clear imaging. Their live feed can be recorded directly to SD cards or external hard drives for later use. This is especially useful for long-term analysis to monitor the progression of potential issues, or for inspection contractors to provide footage to clients.

One company with extensive experience in the hydro industry is GENIFAB. This engineering firm specializes in the field of heavy mechanical devices, such as locks, mobile bridge mechanics, and ferry loading dock mechanisms, among other systems. They have developed in excess of a hundred different prototypes built to serve Canadian dam facilities such as Hydro Quebec.

In 2007, GENIFAB saw an increase in their calls for inspection work. Up until that time, they were generally employed as design engineers working in tandem with commercial divers to provide inspection services. The calls for inspection assistance were often after major mechanical failures or a broken gate at one of the hydroelectric dams. Donald Dupont from GENIFAB said, "The cost of divers was prohibitive for performing preliminary inspections or preventative inspections, it was also difficult to coordinate with their schedules”. As a result, GENIFAB needed to innovate in order to grow.

Dupont searched for potential solutions and came across Deep Trekker. He opted to purchase a DTG3 ROV and perform the inspections himself. Deep Trekker’s DTG3 is the most compact and affordable ROV in their lineup. This micro-class ROV weighs less than 20lbs and the entire system packs into a single travel case. Capable of deploying in minutes and battling currents of up to two knots, this vehicle was perfect for the needs of GENIFAB. 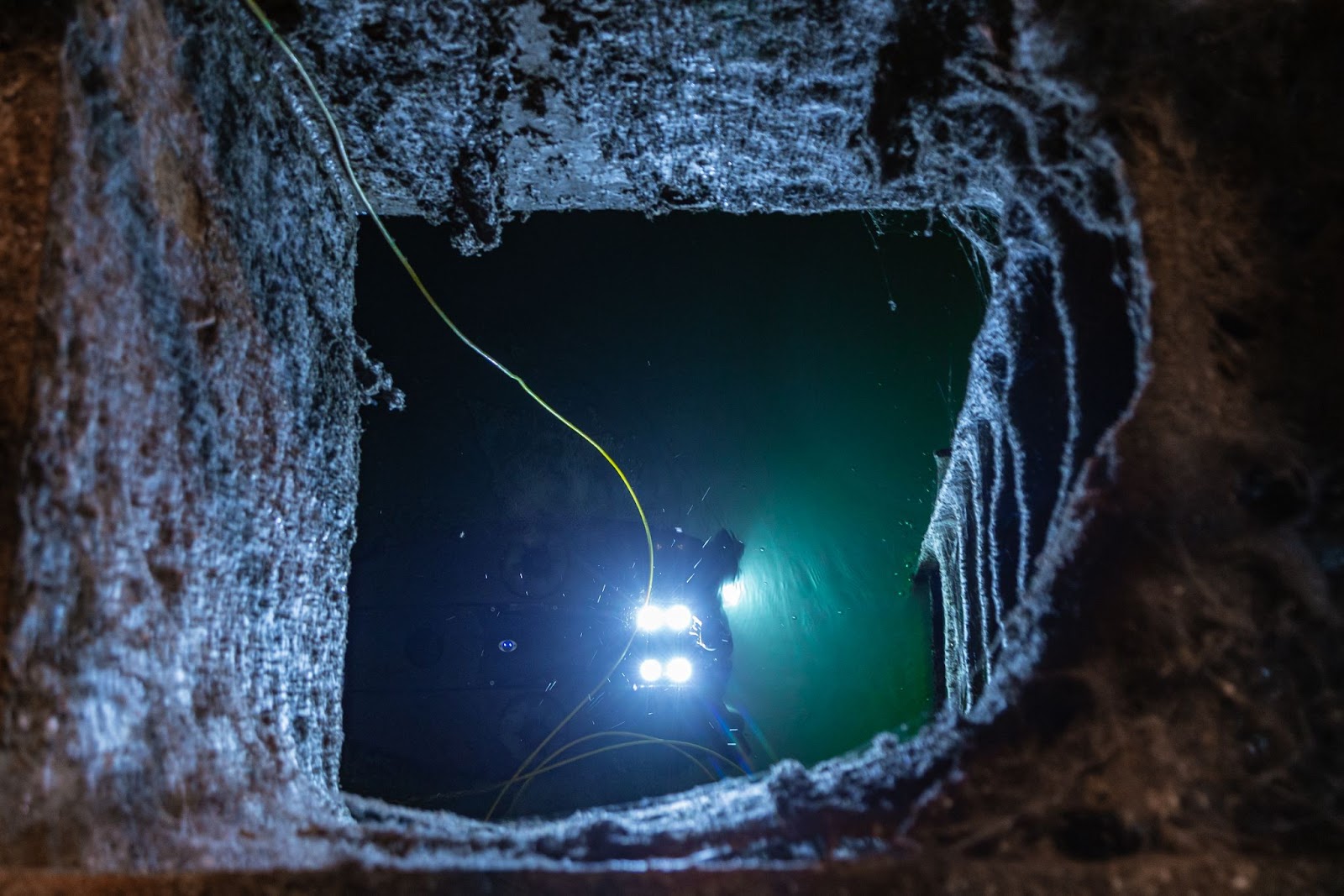 Not only did this make all of their inspections possible without the high cost of dive teams, it also enabled them to perform some inspections while keeping portions of plants running. "For instance, we can inspect a draft tube on one group while the other groups are operating," Dupont commented. The risk to a single ROV is much less than the risk to a human life, increasing the comfort level of not just GENIFAB but also their plant owner client.

In addition to the dangerous nature of dive inspections, the price of divers can be prohibitive. The cost of such risky and specialized services comes at a serious premium, plus the time needed for the extensive diver preparations and scheduling, as well as the support facilities required to support divers, can add up quickly. To address the concerns of unscalable diver costs, GENIFAB looked to ROVs as a cost-effective robotic solution.

Choosing the DTG3 by Deep Trekker enabled them to conduct inspections quickly and easily, without any external contracting. Without the dangers associated with manual inspections, certain underwater tasks could now be performed without any downtime for the plant.

An unforeseen benefit for GENIFAB was the ability to get involved early in rehabilitation projects. Performing the inspections internally, they built trust within their clientele and distinguished themselves from competitors. "Offering underwater inspections is expanding the field of work of our company," Dupont said. "We are able to offer a complete technical solution to dam owners, not only the mechanical design portion but also the entire structural design of the spillway”.