The ocean is an mysterious world which is continuously evolving and altering with currents, climate change, marine life, and other outside forces. Yet, with its monumental vastness, our knowledge of these occurrences and their effects is still limited.

Some of the changes are negatively impacting the surrounding environment, such as the effects of coral bleaching or micro-plastics, but change doesn’t always have a negative impact. For example, artificial reefs can act as new homes to a wealth of marine life and create a new and beneficial habitat.

A senior research scientist with the Department of Fisheries and Oceans at the Biological Station in St. Andrews, New Brunswick, Shawn Robinson is actively engaging in learning how the ocean is changing. One way he is doing this is by monitoring how human interactions are changing what marine life are inhabiting certain areas of interest.

Aquaculture is a prime example where humans are directly interacting with the ocean and potentially altering the landscape, but if this is good or bad is often debated. With the increase in demand for Aquaculture as a sustainable food source for the future, strict regulations and monitoring processes are needed. Some opposition notes that bacteria can develop on the ocean floor; researchers have stated that not all bacteria is bad, however, constant monitoring and testing must be done on the surrounding area to distinguish the types of changes.

Shawn Robinson set out to understand soft-bottom ocean sites with nearby aquaculture farms. His project focused on collecting enough samples to determine what sort of species were living here, what their genetic makeup was, and how this group of species is potentially changing with the development of an aquaculture site. Lastly, they wanted to test how far away from the site these species were living and nourishing on the ecosystem.

New research techniques are now able to detect the DNA of any type of organism from sediment and water samples that a species has come in contact with. With this technology to identify DNA, researchers can understand the ancestry of the species, and the environmental conditions that the species lives in. As an extension of this, they can also tell if a species traveled from a different region to relocate to this new area of more fruitful climate or food supply.

The ability to detect what species exist in a certain area without having to visually identify them, has opened up the doors to much more comprehensive research. But, the obstacle still remains of how to best collect these samples in mass and over a longitudinal study in specific areas.

The Challenge of Underwater Research

One of the largest challenges with oceanographic research is the availability to view and collect data from under the water. Unlike other land-based climate change research, the safety concerns with getting underwater pose a much greater barrier to knowledge. Research Remotely Operated Vehicles (ROVs), or sometimes referred to as underwater drones, have become the go-to tool for environmental researchers, such as Shawn Robinson, to collect samples and perform visual inspections of their investigation sites without the cost or risks of diving.

To aid in observing below the water’s surface, Robinson turned to Deep Trekker and the [DTG2 underwater drones](https://www.deeptrekker.com/shop/products/dtg3) to be able to visually capture their findings. The Deep Trekker DTG2 ‘Worker’ was selected to test the validity of using ROVs for remote data collection, over two different aquaculture sites.

The Deep Trekker DTG2 Worker comes equipped with a manipulator arm which can be outfitted with a syringe feature to collect water or sediment. Although, Robinson was searching for a way to collect multiple samples at the same site, at the same time so they could collect redundancies for their research.

Innovation and Some Clever Design

Robinson took it upon himself to design a 3D printed device to accomplish this mission. 3D printing is another form of technology, similar to underwater drones which have recently become more accessible for researchers to purchase and use over multiple studies. Robinson used a free 3D modeling software and was able to create and print many iterations of six syringes in a circle. The design took advantage of the rotating manipulator function on the Deep Trekker ROV, which would open all of the syringes at the same time to bring in the water sample.

The Deep Trekker manipulator provided the exact motion Robinson required to open the syringes because the manipulator could rotate continuously 360-degrees. The syringes could be set to be closed prior to the dive, and when rotated, an attached string would pull all the syringes open.

The study is focused on understanding how far away the enriched soil from the aquaculture sites entice new and additional species. Currently, in a proof of concept phase for remote sampling, Robinson’s research is focused within the Bay of Fundy, New Brunswick, Canada. 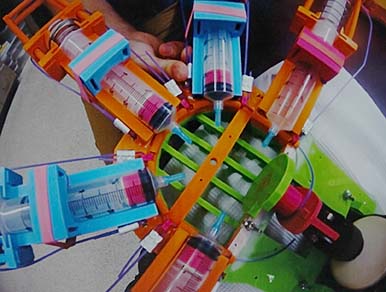 Robinson is currently investigating two sites in close proximity to aquaculture farms and has so far collected over 200 samples with the Deep Trekker ROV. Each of the six syringes takes in 50cc of the sediment/water and is then used to distinguish each individual species that is inhabiting that area.

By using a dive weight at 10 meters (30 feet) on the tether, the researchers deploy the ROV with the weight to send it straight down. This is used as a geo-reference point. From here they know the ROV has a 10-meter radius to collect its samples, and the onboard compass heading provides additional information such as which quadrant they are inspecting to compare to over the longitudinal study.

Looking to the future

Robinson has brought this research to conferences as a proof of concept for remote DNA sampling. This initial step will kick off the next round of funding and research to provide greater insight into how species migrate or evolve to adapt to their environment, particularly when there is an outside influence to change the ocean, such as an aquaculture site.

Technologies Continuing to Improve the Lives of Researchers

This is just one example how researchers and their creative thinking can make the most of funding and time to truly expand the knowledge base of oceanographic research. The expansion of underwater drones along with other unique technologies, such as 3D printing, have opened the doors for researchers to conduct more studies within what sometimes can be a limited budget and time to complete investigations.

We at Deep Trekker will continue to strive to provide accessible and commercial-grade tools to expand the abilities of oceanographic research, contact us today to learn how we can help with your next research project >