Western Canada Marine Response adding the use of a Deep Trekker DTG2 underwater drone to their arsenal of oil spill response tools.

Oil and chemical spills happen quickly and their effects are felt for many years. The news often highlights how these spills happen and the devastating impacts, however, what is less often covered are the clean-up efforts by dedicated oil spill response organizations and the tools that are used to get the job done. An example of one of these groups is Western Canada Marine Response Corporation (WCMRC), based in British Columbia, Canada.

WCMRC has been in operation for nearly 40 years and is the only certified response organization covering Canada’s west coast. At any moment their 24/7 notification system can accelerate any of their 40+ response vessels into action. Their vessels and equipment include booms that are used to contain and limit the spread of oil, mechanical skimmers which recover product and sorbents that adhere to hydrocarbons. Another piece of vital equipment in their arsenal is the DTG2 Worker Remotely Operated Vehicle (ROV) or Underwater Drone. 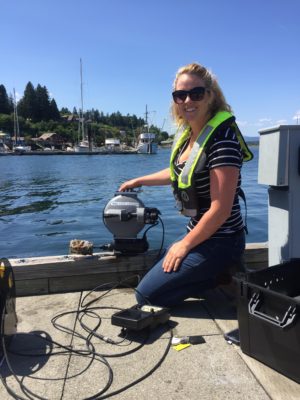 Following a spill, WCMRC uses the DTG2 to quickly assess what is going on beneath the surface. It can also be used to collect water samples at various depths, vegetation and sediment samples. This enables WCMRC to make informed tactical decisions and continually evaluate the ecosystem's health. Outside of a spill, WCMRC utilizes the underwater drone to conduct inter-tidal and sub-tidal assessments. The data collected from these assessments are used to develop their various response plans, including prioritizing certain zones that may be particularly at risk during a spill.

"It certainly has increased our capacity as a spill response company," said WCMRC Response Readiness Coordinator Dannie Richards, "The size of the DTG2 ROV is also hugely advantageous as it is very easy to transport and incredibly quick to deploy, which is critical in any emergency situation."

Deep Trekker prides themselves on having a unit that can be in the water in 30 seconds or less. Having an option that also does not take long for operators to learn on is important since in an emergency there may be many different sets of hands on the controls for the DTG2. Lastly, since the DTG2 does not require regular maintenance such as cartridge replacement or oiling or greasing, it is off the shelf ready to respond to an emergency.