April 17, 2017 – Washington, DC – Deep Trekker Inc. has been awarded the Abbott Most Innovative Product Award from The North American Society for Trenchless Technology (NASTT) for their DT-340 Pipe Crawler.

The Deep Trekker DT-340 is the world’s only truly portable, battery-operated crawler system. Everything needed for trenchless inspection comes in two carrying cases, with no need for dedicated trucks or complicated systems. The system deploys in under 5 minutes. Deep Trekker introduced its enhanced product line of trenchless technology at NASTT’s No-Dig Show this past week. This event provided the ideal platform to display the DT-340 Pipe Crawler and its robust features to industry professionals.

“We were absolutely thrilled to be chosen for this award from the wide range of new technologies,” said Sam Macdonald, President of Deep Trekker Inc. “We aim to make the most robust, yet easy to use and deploy systems for infrastructure inspection, and the DT-340 Pipe Crawler was developed keeping these principles in mind.”

NASTT annually recognizes two companies with state-of-the-art products in either new installation or rehabilitation for their achievements in advancing the trenchless industry. In October 2010, NASTT re-named these prestigious awards in honor of the late Joseph L. Abbott, Jr. Joe was an active member of the society since its inception in 1990.

Performing regular inspections of buried infrastructure have proven to be the most challenging factor for many municipalities due to the lack of accessibility and affordability. One small town spent $400,000 to hire a CCTV service company to conduct inspections of it storm water pipes. Realizing after that they could conduct their own inspections using trenchless technology; this lead them to purchase a Deep Trekker DT- 340 Pipe Crawler at a fraction of the cost. It is this type of time and cost savings that lead to the DT-340 being the recipient of the Abbott award. 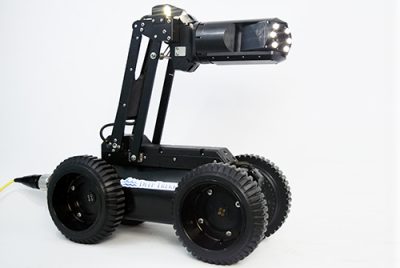 Deep Trekker Inc. was founded in 2010 with a mission to create portable, affordable, and easy to use underwater inspection tools. The company is headquartered in Ontario Canada, with engineering and manufacturing all completed in house. Based on a clean sheet design, the premiere product, the DTG2 ROV was introduced in limited run in August 2011. With the success of the DTG2 ROV system, the company launched the DTX2 ROV in 2015. These robust underwater ROVs are currently being used around the world in industries such as aquaculture, commercial diving, municipalities, police search and rescue, military, and research. In 2016, the company expanded the municipalities market by launching a submersible pipe crawler system, based on the same principles of the ROV systems.

Looking for Resources on Our Products?