One of the greatest challenges for divers and Remote Operated Vehicles (ROV) pilots is underwater navigation, especially in low visibility. Underwater inspections can be dangerous, expensive and in some cases impossible for SCUBA divers to carry out. Many industries are turning to small underwater drones, called ROVs to carry out these operations. 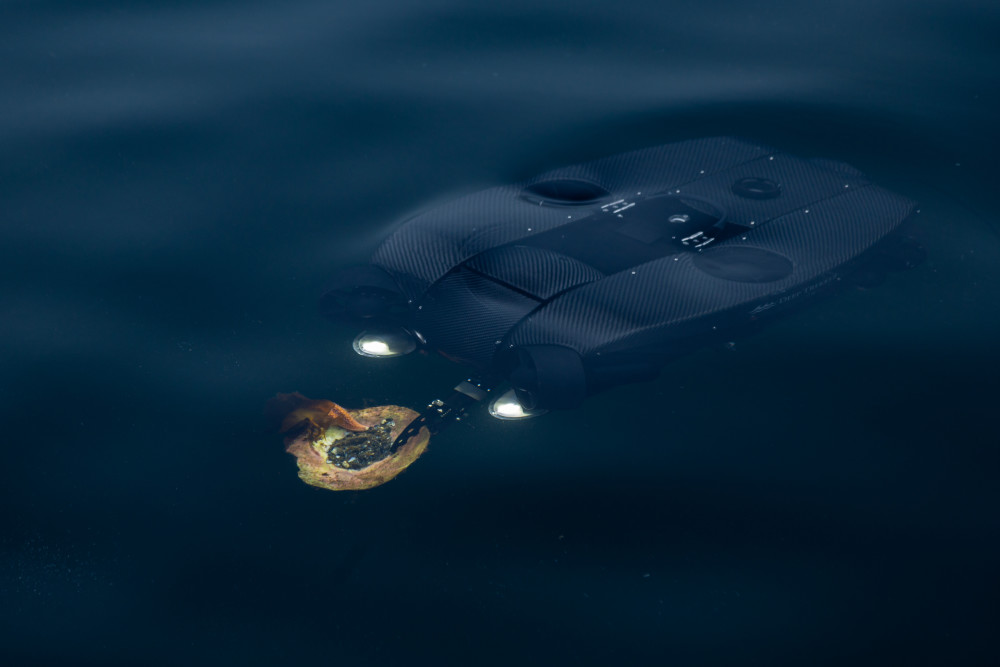 As new technologies are miniaturized and manufacturing processes become cheaper, cutting edge ROVs are being outfitted with an array of specialized sensors connected to small handheld computers. These sensors report detailed telemetry data back to the pilot and also allow the ROV to behave autonomously improving the ease of use. For example, aerial drone pilots are accustomed to real time GPS data and autonomous position holding. ROVs can use acoustic triangulation to give pilots a real time moving map display and when paired with other sensors they can hold their position autonomously, follow waypoints or return to home. Underwater navigation is much harder than aerial navigation as visibility is typically poor and radio waves are absorbed by water. Advanced ROVs use revolutionary acoustic sensors to achieve the same feats of autonomy as aerial drones.

Camera The bread and butter of positional awareness is a pilots view of their surroundings. ROVs can send 4k video feeds in real time to the operator on the surface through a data tether.

Inertial Measurement Unit (IMU) An IMU is a sensor chip that contains a compass, a three-axis gyroscope and a three axis accelerometer. These are ubiquitous in smart devices, from smartphones to VR headsets to robotic arms. A built-in algorithm will fuse this data into a best estimate of orientation in three dimensional space.

Depth Sensor Finely tuned pressure sensors can identify the ROVs depth below the surface. This allows for navigation and autonomous depth control.

Multibeam Imaging Sonar This technology is like magic seeing with sound, essentially digital echo-location. Hundreds of beams of sound are fired off simultaneously to give you real-time video of what's in front of the ROV without needing to use the camera. It is similar to a medical ultrasound, but much, much easier to interpret. This can be used for navigation by recognizing underwater landmarks, or it can be used to search for lost objects on the seafloor. The high frequency multibeam can even inspect small structures with an impressive millimeter resolution.

Ultra Short Baseline (USBL) aka underwater GPS A sonar beacon mounted on the ROV sends a ping to a beacon at the surface and its position is triangulated between transducers that are millimeters apart. The millimeter baselines (distances between the triangulation points) is what gives it the name Ultra-Short Baseline. The location of the ROV relative to the topside beacon is correlated with GPS data to provide real-time latitude and longitude of the ROV

Doppler Velocity Log (DVL) This sensor uses sonar transducers which act like police speed guns angled in four directions towards the sea floor. It measures the change in frequency (pitch), exploiting the Doppler Effect to calculate the speed and direction (velocity) of the ROV. Additionally, it measures response time of these sonar pings and can calculate the altitude above the bottom. This can be used to improve quality of USBL data, and autonomous depth holding. The most exciting use for this data is in providing autonomous position hold allowing the ROV to fight currents without pilot intervention and paving the way towards full autopilot.

Sensor Fusion: Greater Than the Sum of Its Parts.

The basic IMU and Depth sensors are not novel technologies, but with new miniaturized processors, they allow for tight stable control of an ROV utilizing built-in autonomy algorithms. The IMU provides data on roll, pitch, and yaw. In addition to displaying a compass heading on the pilots control interface, advanced ROVs will constantly monitor rotational velocity along all three axes, automatically firing the thrusters to counteract any motion. This acts to stabilize the video feed helping significantly with underwater navigation. Contrary to what you might think, control inputs to these movements are not a direct function of delivering power to the thrusters based on joystick displacement, but rather an algorithm decides a target velocity based on the joystick displacement. The ROV calculates the amount of power to send to each thruster in order to achieve that target. If the joysticks are centered, the target velocity is zero. This means that any rotational velocity introduced by current or tension on the tether will be counteracted and your joystick commands will be executed smoothly. Most noticeably, rotational momentum will be effectively cancelled. When a pilot takes their thumb off a joystick, the ROV will stop turning and stay in place. As for the Depth sensor, another algorithm can control the vertical thrusters to keep the ROV at precisely the depth the pilot left it. 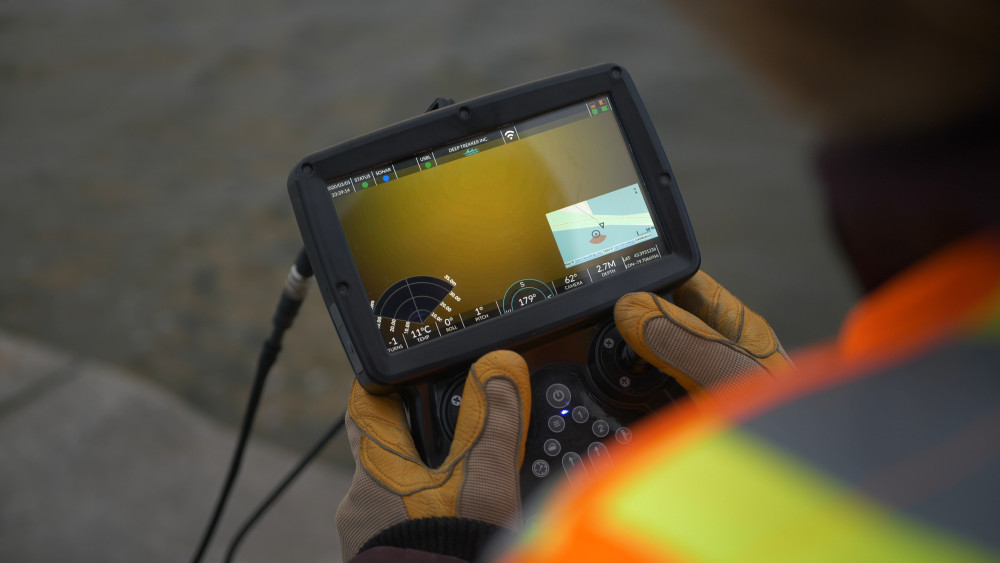 Navigating solely by compass underwater is hard, so why not use GPS? Radio signals from GPS satellites used by aerial drones are absorbed by water, rendering them useless for ROVs. As a result, ROV Pilots have favoured systems with USBL and DVL integration to aid in underwater navigation. A USBL can triangulate the ROVs position once a second in order to provide a moving map display, log a track line and drop points of interest. Simultaneously, a DVL bounces sound waves off the seafloor to determine speed and direction of movement every 100 milliseconds, giving rise to stabilization algorithms akin to what are used for roll, pitch, yaw and depth. The ROV can now hold its orientation and its position in all three directions automatically fighting current, smoothing out motion and cancelling momentum. The altitude measurement can also be used to set a target distance from the bottom, rather than a target depth and the ROV can automatically climb and descend as it travels forward over an uneven seafloor. 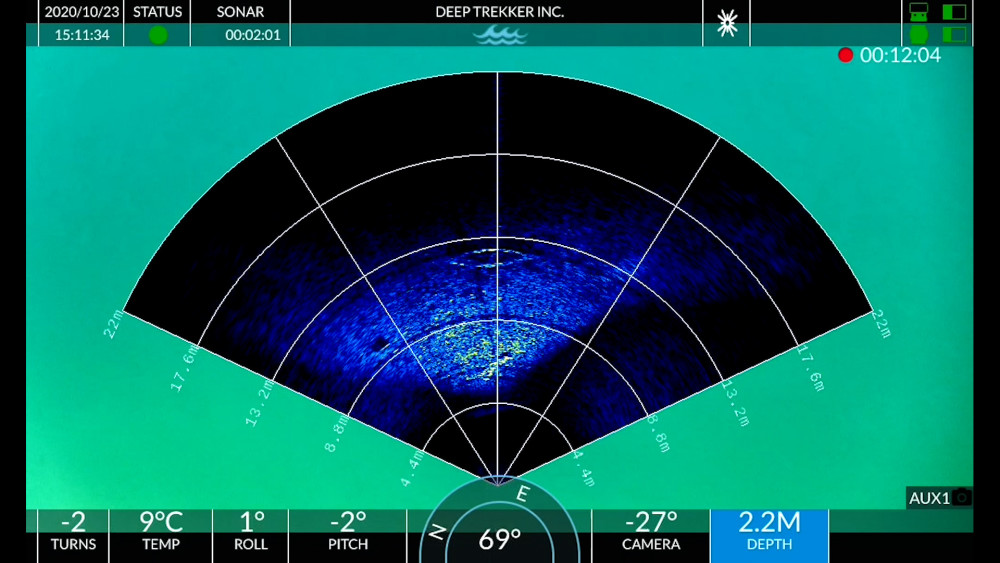 The magic of new cutting edge ROVs comes from the integration of all of these sensors directly into the control system which performs a process known as “sensor fusion”. This is where all the different data streams are compared, throwing out bad data and creating the best possible estimate of current location. The DVL extends stability from the IMU and provides better control response, cutting out lateral momentum in addition to tighter depth hold. The IMU provides compass heading to the moving map display. The Latitude and Longitude from USBL will be significantly more accurate when checked against velocity and accelerometer data, and gaps between the one second pings can be filled in with the DVL data. The DVL data is improved by checking the accelerometer data. The interconnections go on and on. By integrating key underwater navigation tools, ROVs make compass navigation a thing of the past as pilots always know exactly where they are and have an autopilot stabilizing their movements.

Next Generation of ROV Technology

The Revolution ROV was engineered to be a platform which can network with numerous modular add-ons. Deep Trekker’s ROVs utilize a custom operating system running on a computer built into the hand controller which is networked with the body of the ROV, the sensor pod, and the camera head. 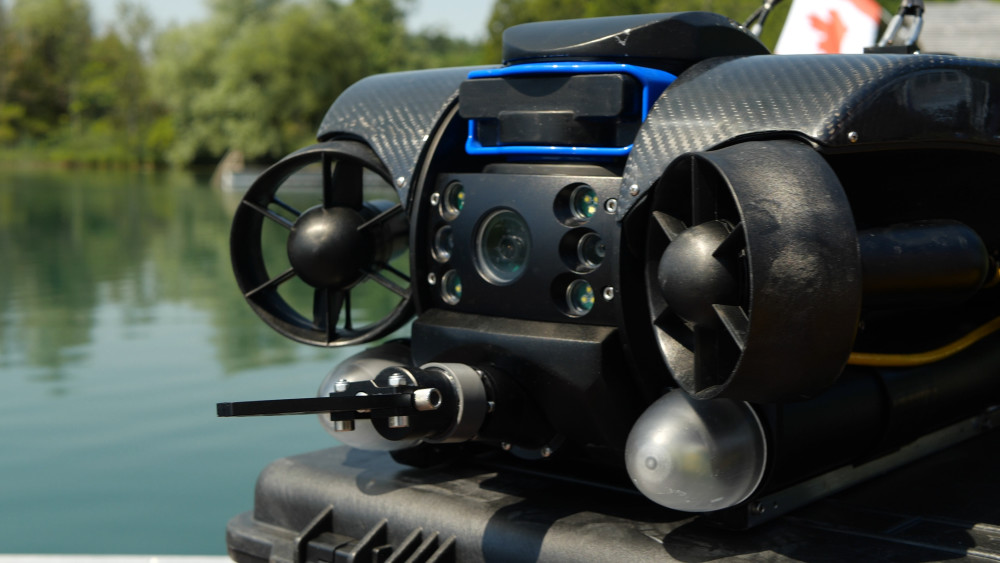 This novel ”Bridge Technology” allows for cutting edge third party sensor systems to be plugged directly into the ROV with their data being processed in real time by the controller. Multibeam Imaging Sonar can be mounted on the rotating camera head, viewed directly on the controller and logged on an SD card while simultaneously recording video, taking pictures and recording a USBL track log.

Dissolved Oxygen can be mounted and displayed on the hand controller as well as logged with GPS and depth data every second. USBL and DVL systems integrate seamlessly into the navigation package displaying a moving map display simultaneously with the imaging sonar feed.

The proprietary mapping software installed on Bridge controllers contains our own fusion algorithm which combines data from all of the sensors and even compensates for fluctuating magnetic fields from different combinations of thruster output. Essentially the ROV system is able to analyze its surroundings, improve its behaviour and make underwater navigation effortless. Software updates coming later in 2021 will give pilots the ability to program waypoints and search grids with the ROV autonomously navigating in an autopilot mode. The future of robotics is autonomy, and the Revolution NAV is the hardware kit required for our evolving autonomy software. 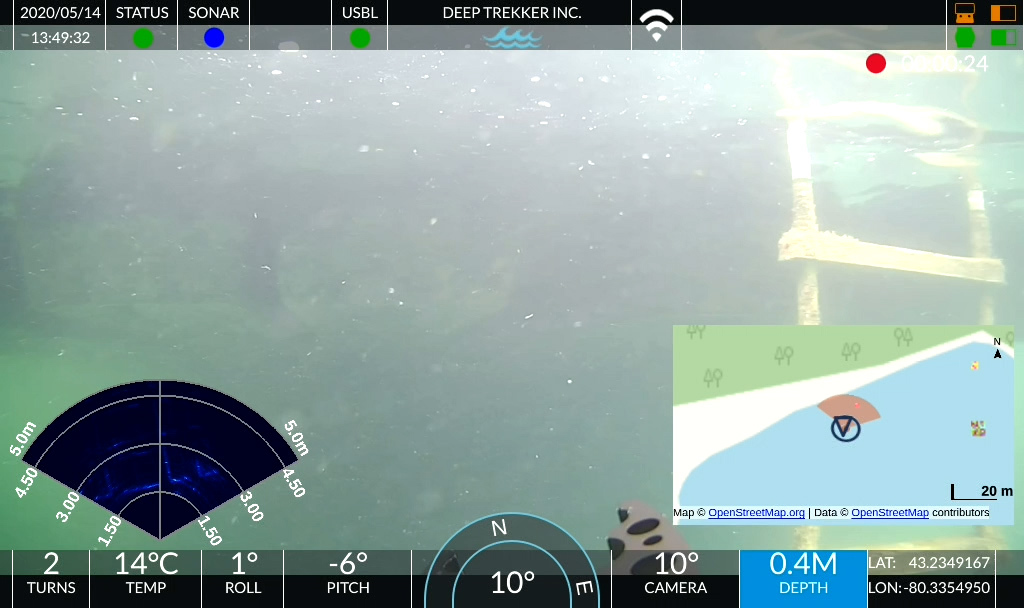 You can learn more about how Deep Trekker vehicles are used for underwater navigation in our case studies with aboutunderwater evidence recovery and the groundbreaking archaeological finds in the Straits of Mackinac. Our team of industry experts is always here to answer any questions you may have,reach out today!

Do you want to take the leap and create an ROV package of your own? We can make a custom Deep Trekker package just for you. Request a quote today to get started.

Marine Unit Tips: Training Your Team to Use ROVs for SAR

Specializing in identifying targets of interest, victim and evidence recovery,...