It was one of those calls you just love to get as a manufacturer – a call from a happy customer asking you to come and check out what they do; a call that lets you go check out how your products are being used to save money and reduce risk in the real world. I got the call on a Tuesday afternoon from Brett “Ferg” Fergerson, a loyal Deep Trekker customer working for Global Contracting on a dam project in Massena, NY. Ferg had been using his Deep Trekker on this job previously, and invited me out to watch an inspection of a gate covering an intake tunnel using the DTG2 mini ROV.

Want to know more about the DTG2? Email us with your request.

The overall project was to replace a butterfly valve in the tunnel. In order to do so, the main gate covering the tunnel had to be removed for the first time since the damn was built, nearly 50 years ago. The opening would then be covered by a massive steel disc that would serve as a seal, so that the tunnel could be drained and the repair made. The plan was to use the main bolts that had held the gate in place over the opening to hold the sealing disk. There was concern over the condition of the bolts and if enough material remained to hold the seal.

The placement of the sealing disk was to be done using a crane and two commercial divers using hard hats and surface supply air. This endeavor would be costly and not without significant risk. It was imperative to determine that the sealing disk would remain secured by the bolts before hiring the crane, and undertaking the placement of the steel disk.

As a bonus to this incredible opportunity, I put my boat in at Kingston and headed up the beautiful St. Lawrence River through the Thousand Islands, taking a leisurely 2 days to reach the job site. I highly recommend commuting by pleasure craft if you ever get the chance! 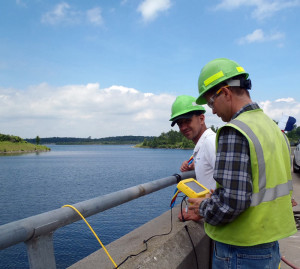 We started the warm work day with a visit to the Alcoa safety offices where we watched a safety video and wrote a short quiz to ensure we took it all in. Once geared up with our safety gear, we headed to the damn. We were greeted by several engineers and technicians who would be observing the work, and participating in decisions about the fitness of the remaining bolts. I was excited to have so many people there to try out the Deep Trekker. I wasn't disappointed; everyone took a turn at piloting the Deep Trekker DTG2, and we had several expert pilots by the end of the day!

After splashing down two Deep Trekker DTG2 mini ROVs, Ferg and his crew were able to easily locate the intake, and begin the inspection. Beginning with an overall survey and count of the bolts that had held the gate.The team used the ROVs to meticulously inspect each bolt, close up and in great detail. While several bolts had sheared off, most were found to be intact and in good shape. Each engineer in attendance was easily able to inspect the bolts on the superbright screen controller, and several chose to use the Digital Video Glasses attached to the controller for an immersive view. Because of the extreme maneuverability of the ROV and the 270 degree camera sweep, views of each bolt from any angle, including above and below were easily made.

After the assessment was made, a surface-supplied diver was deployed to clean and prepare the bolts. The DTG2 ROVs remained in the water, and were used for diver monitoring and safety.

Overall it was a great day, and all parties were excited about the future use of these low cost but highly capable ROVs.