HomeResourcesDivers Working in Conjunction With ROVs

Divers Working in Conjunction With ROVs

Underwater Magazine posted an editorial about the use of Deep Trekker ROVs working with Divers in their January/February 2016 issue.

Exploring the marine world by means of diving has been growing in popularity since the 16th century when people began to use dive bells supplied with air from the water’s surface[1]. For anyone who has dipped their toes into the diving community today, they know that diving missions are not limited to exploration and recreation. Diving provides much more intensive purposes when it comes to ocean exploration, infrastructure, farming, military and salvage operations than what one might expect. That being said, serving a larger purpose also means more associated risks. That is why companies like Deep Trekker Inc., a Canadian company that makes mini-ROVs, have improved their technology in a way that allows them to help mitigate some of the risks associated with commercial diving.

Commercial diving is a major industry that exists to tackle complex challenges that happen to sit below the surface of the ocean’s waves or within the tanks of industrial plants. Ranging from search and rescue missions to munitions response, and contraband inspections to salvage work, commercial dive teams perform a number of tasks that bring about more risks than one might realize. 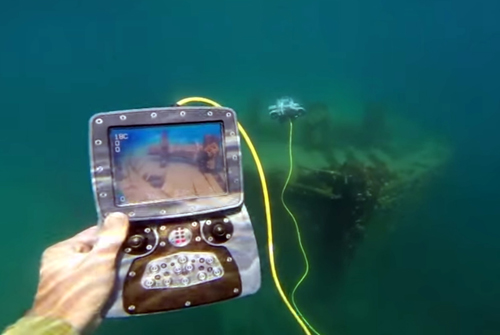 Basically anytime something leaks, crashes, sinks or catches fire in the marine world commercial salvage divers are called in to solve the problem[2]. Despite the associated risks and dangers, salvage diving operations are extremely important to ensure the integrity of any underwater infrastructure and operations. Without salvage operations, any accidents that take place in the marine world could have detrimental effects not only to surrounding ecosystems but to human health in some cases as well.

In addition, commercial divers are required to perform inspections and solve problems in various industrial situations, like in nuclear power plants. Energy plants involve various components for their operations such as cooling tanks and wet wells. In many situations, even if these components need to be inspected, they cannot be turned off or stop the flow of water without risking the integrity of the operation.

Mike Fletcher, a professional commercial diver and renowned wreck diver, states that “there is always the risk of injury or threat to the person diving”. He explains that whenever there is the chance to use something other than a person to perform a task the risk of injury to the diver is eliminated. 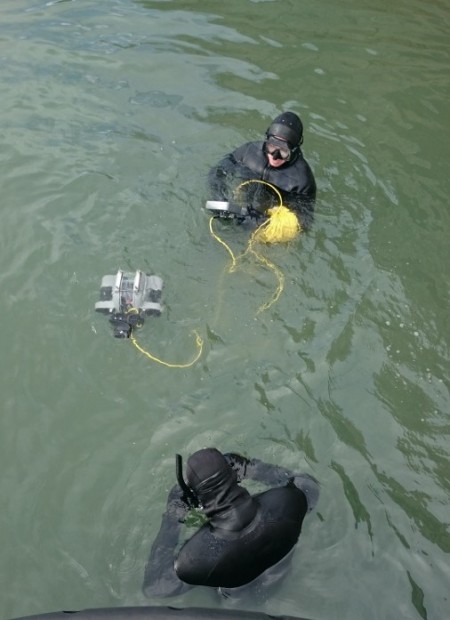 It is because of the dangers associated with jobs like this that remotely operated vehicle (ROV) companies like Deep Trekker Inc. have been working to provide technological answers to some of the problems that salvage divers face. Underwater ROVs are inspection tools that when used in conjunction with divers significantly improve project safety. With the use of an ROV, a dive team can deploy the unit from the deck of a ship and monitor their fellow divers who are working below the surface of the water. The ROVs can also be used to examine sites before a dive team is sent in and identify any potential dangers.

While ROVs are fantastic tools that allow quick and efficient underwater inspections, they are not meant to replace divers in commercial dive projects. The best option when taking on an underwater task is to use a diver in conjunction with an ROV to allow for the diver’s judgement to be used while eliminating most of the risks associated with a diver performing inspections and underwater diver jobs.

Deep Trekker Inc. recently launched a new product developed specifically to aid divers in their important missions. Last month the company launched their new diveable control system aimed at giving divers the ability to explore unknown underwater areas. The diveable control system sports a similar design to the company’s traditional controller, with on-screen display right from the hand-held control system, but what sets the new controller apart is that it is entirely waterproof and made for diving. The product is built so that divers can take the entire ROV system (including the controller) below the surface with them, allowing them to explore unknown areas from a safe distance before venturing closer. The company’s goal has been to provide a system that allows divers to fully assess a situation before taking the risk to swim into the space themselves.

Fletcher believes that the diveable control system is the perfect solution to ensure that divers are still able to perform the jobs that need to be done while reducing the risk of injury or getting caught in a current or tight space. He explains that there are a couple of situations that he has encountered during his time as a commercial diver where the diveable control system and ROV would have been a great asset to the team. “Working in double confined spaces, which is a confined space that is under the water, is the perfect place for a system like this to be used” remarks Fletcher.

He also explains that the diveable controller can be used in industrial plants where cooling tanks or wet wells need to be inspected. In both of these situations, the flow of water is vital to their functioning ability. In situations where the flow of water is not able to be turned off, like a cooling system in a nuclear power plant, without risking the safety and integrity of the plant, the divers must inspect the situation while the pumps and flow of water are still running.

Own an ROV? Let us Know What You Find it Most Useful For!

“Situations like this are where I see the diveable controller providing the most value. You have the ability to send a diver down to inspect the situation, using their own judgement to report back to the surface, but without requiring them to swim too close to dangerous areas where the flow of water may suck them in or get them stuck. Here the diver can pilot the ROV toward the area that needs to be inspected while still accurately controlling how close the ROV gets to the situation. You don’t want the ROV to get stuck either so having the diver down there allows them to ensure that they only let out enough tether to let the ROV get close to the situation without getting sucked in itself” explains Fletcher.

Divers working in conjunction with an ROV can control it from below the surface of the water themselves to help inspect plants that use travelling screens. A travelling screen is a common component of most power plants where the water flows through and the screens are used to collect the debris that are in the water. As the debris builds up on the screens there is the risk of it getting stuck and blocking the screen so they have been created to continue travelling along a conveyor to avoid debris build up. This movement of the screens can be dangerous for divers who are tasked with inspecting the water intake system while in motion, and is another situation where the diver can pilot the ROV to capture real time in action video. Having the diver below the water controlling the ROV also means that again the ROV will not get stuck on anything because the diver is able to control how close the ROV gets to the situation.

Fletcher also explains that this combination can be effective when inspecting a leak on the face of a dam. “You absolutely do not want a diver to get too close to the leak where there is a pressure differential because the diver will get stuck” states Fletcher. Sending an ROV down without a diver also means that there is a risk of the ROV getting stuck so this is another situation where having a diveable controller can be the ideal solution to perform the inspection.

In most commercial diving operations the goal is to get the diver as close to the situation as possible without risking their safety. This is where ROVs can be used with divers to ensure the safe execution of dive jobs. Having the diveable control system in place also allows the diver to “have the ROV’s back” explains Fletcher and protect the company’s asset. Traditionally, in some of the situations described above where it may have been too dangerous to send down a diver, two ROVs would have been used so that those at the surface could try and gauge with one ROV how close the second ROV was getting to the situation without getting stuck. Now, with the diveable controller, sending down a diver with an ROV allows the risks to be significantly reduced and improve efficiency because human judgement is used while below the surface. 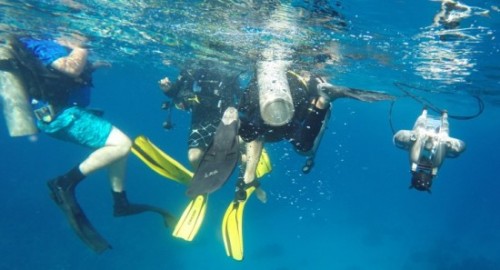 The control system has generated immense interest among the commercial diving community who work in military and salvage industries. While these industries provide the perfect applications for this new device, other industries such as marine research, contraband inspections, or general exploration can all benefit from the diveable controller as well.

The industry of commercial diving will continue to be dangerous in specific situations, although it is evolving to mitigate and reduce these risks. New developments such as this completely contained and submersible ROV system, will play a significant role in the commercial diving industry to improve diver safety, reduce dive times, and cut costs.