Getting a Fish's Eye View with DTG2 Mini ROV

Richard Chapman is an avid fisherman in Stafford UK who primarily fishes for Carp, Tench, Pike, or Perch. Through his experience he has learned different techniques to find where fish like to hang out or where to place chum for the best catch; his biggest obstacle (like most fishing enthusiasts) has been never really knowing what happens in the time between when the bait hits the water and when the fish is hooked, until he learned of the Deep Trekker remotely operated vehicle (ROV).

Want to know more about the DTG2? Email us with your request.

Fishing gear has improved significantly as the consumer market has soared is the past few years. From better bait, rods, fish finders, and chum delivery methods, the act of fishing has become an interactive game between fisherman and fish, one where we wish to know as much as possible about tactics and behaviours of our prey.

“The beauty of the Deep Trekker is that you can move it instantly, get into areas that have never been explored & if the fish are not in the area you can quickly & easily move. Also the fact that it is a self contained unit, no cables or power sources that get in the way.”

Underwater cameras were a step up from echo fish finders, providing a colour video of the waters below the boat. Quality underwater cameras were once so expensive they were only available to large businesses, the advancement of technology has opened this market to the consumer, making anyone an underwater videographer. Chapman has always been interested in fish habits and underwater film. Like many people he has tried sticking an underwater camera on a paddle or putting on a scuba mask to see what mysteries lie below. Both options fell short due to the limited visibility, maneuverability, and high disturbance in the water when trying to get a good picture. 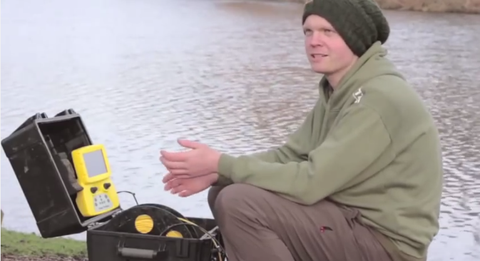 Chapman decided to turn his attention to fish behaviour, and his search led him to the Deep Trekker remotely operated underwater vehicle (ROV). With the Deep Trekker DTG2, Chapman now had a first person view of what was really going on under the water, right from the shore.

“What did surprise me is how much more you actually see on the [Deep Trekker] on board camera - it seems to cope better with the low light in deep murky water where the GoPro although higher definition it isn't as clear at times.”

In Britain, fish tend to be most popular in murky and low visibility areas. Often it is impossible to see anything from above the water. Using techniques of bait and casting, the game is one of trial and error. This is where Chapman likes to use the Deep Trekker the most; where he can stay on shore without disturbing the fish in a canoe or boat and drive towards areas where he hopes to cast. Surprisingly, he discovered using the Deep Trekker that many of the spots he thought were clear gravel were covered with weed or silt, which was hiding his bait. This finding lead him to seek out new and better areas to cast his bait, with less risk of wasting chum in areas where no fish would find it. When asked what he is looking for when he takes the Deep Trekker to his fishing sites,

Chapman said, “I am using the live stream to watch the fish’s reaction to baits and rigs underwater.”

“Although not a cheap purchase... [Deep Trekkers] are accessible to most people - In carp fishing people will spend a couple of thousand pounds on the latest bait boat so this isn't far off that”

The wonders discovered under the darkness of the waters are countless, “Really you are limited by your imagination,” commented Chapman when asked about the ways he uses his Deep Trekker. From finding an old BMX bike to discovering a school of Carp shoaled upstream on a day with freezing cold wind instead of in the warmer waters, Chapman’s has learned much more than he anticipated just by watching what goes on underwater. 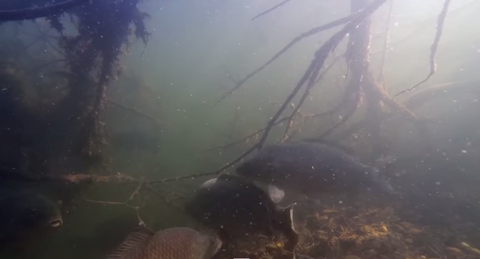 Getting to know what is happening beneath the surface is an exhilarating and educational adventure that everyone should discover. There are countless mysteries of marine life and ecosystems that need to be investigated, and it is through the advancement of fishing gear such as the Deep Trekker DTG2 ROV that will get the everyday person excited about being out on the water.

“You are dealing with real people - it isn't a case of ‘thanks for your money see you later.’ If you have a problem, question or just need some advice they are happy to help and a couple of [questions] were resolved quickly and efficiently.”