The DT320 Mini Pipe Crawler is a remotely operated crawler vehicle for inspecting pipes as small as 6 inches in diameter. Based on a similar design to the DT340, the mini crawler raises the bar for confined space entry and inspection in the most remote locations.

When the Canadian team at Deep Trekker began dreaming about robotic systems to explore the underwater world, they could not have imagined just how vast and complex the water and water management ecosystem could be. With a desire to make the oceans, lakes and rivers accessible to the masses, the team began, nearly 8 years ago, to build robust and easy to use remotely operated vehicles.

The original vision of a tool for exploring wrecks, reefs, and underwater marine life soon became much more, as their robots were quickly adopted for use in potable and wastewater inspections.

“About a year after we sold the first ROVs to Norway for aquaculture inspections I got a phone call from a company in Florida,” explains Sam Macdonald, President of Deep Trekker Inc. “The company specializes in pipe inspections for water management, and had found our portable ROV, the DTG2, on the internet. Asking why he wasn’t using a traditional CCTV pipe inspection tool, he explained that they could not use a large truck, and the access points were only accessible by golf cart. He loved the one-man deployment and hand-held controller on our swimming robots.”

This served as an important moment for the company, and they began looking at how to take the principles of rugged, portable and easy-to-use technology, and bring them to a purpose-built pipe crawler. Like their underwater drones, Deep Trekker focuses on building a system that is fully integrated, meaning it has batteries on board the crawler, and doesn’t require the use of any third-party equipment, including computers, monitors, or generators.

As the design process for the portable pipe crawler took underway, it became evident that Deep Trekker would be able to take advantage of the many components and technologies being used in their underwater ROVs. With a mature supply chain and proven designs, the company was able to bring significant technology via tethers, batteries, monitoring and control systems to the new robots.

Talk to us about your pipe inspection projects

The most recent addition to the Deep Trekker family is the DT320 6-inch Pipe Crawler - offering greater flexibility for pipes as small as 6 inches in diameter. The DT320 is fully submersible, and comes equipped with optional tracks, allowing it to maneuver over the toughest obstacles and various pipe materials. Depth rated to 50 meters (164 ft), it requires no topside power, and is affordable for small municipalities and service companies. 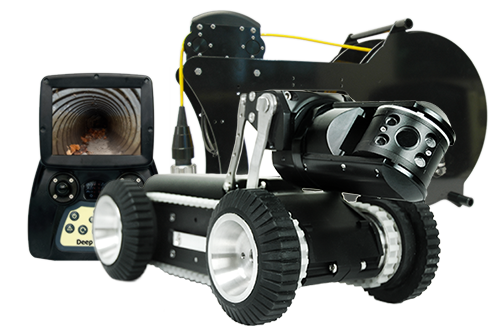 Deep Trekker has distributed its initial pipe crawler, the DT340, to many customers around the globe. The company has found a niche in supplying cities and municipalities with their own systems. This has enabled the operations and engineering teams of these cities to be both proactive in their inspections, as well as to be immediately reactive when problems arise. Without the need to mobilize a full CCTV truck, or wait for contractors, the operators are able to address issues in a timely fashion, often without needing to close the streets.

“I really liked the versatility of being able to send one guy in a truck to figure out exactly what we need to do,” exclaimed John Longo, Supervisor of the Water Distribution & Wastewater Collections Division for the City of Brantford. “No waiting on expensive emergency services or going in blind with our cutters, it just makes a lot of sense for us.”

Lane Cleroux, Engineering Technician for the Town of Renfrew, expressed his satisfaction in the flexibility that the Deep Trekker DT340 offered to his small municipality.

“Not only did it make financial sense for us to own our own DT-340 pipe crawler, we opted to purchase the equipment so we can deploy the camera on our schedule rather than waiting on a contractor.”

For more information, contact us or send us an email at [email protected]

Read on for our step by step guide to basic tank inspection and cleaning with...

Learn about different methods used to perform surveys of the seafloor & the...