Let’s dive deeper and take a look at how the Deep Trekker law enforcement ROV is the best solution for marine search and recovery units. 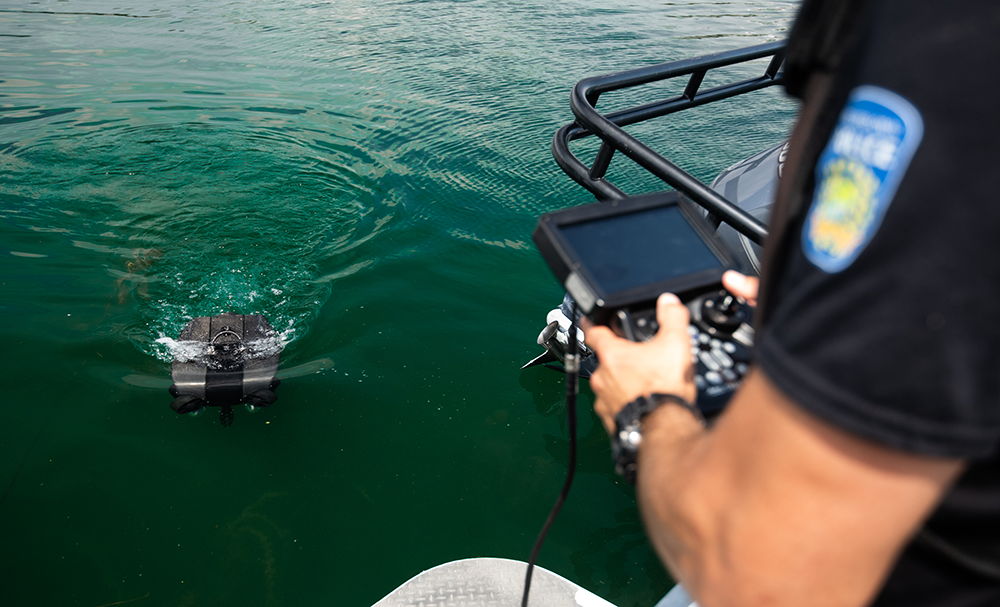 When a drowning occurs in waters that are too extreme for divers, having access to a Deep Trekker ROV and its ability for search and recovery is critical. The DTG3 ROV, REVOLUTION ROV, and PIVOT ROV are equipped for a quick 30-second deployment time and its camera allows for clear visibility underwater. With batteries lasting up to 8-hours, these drones are able to remain submerged underwater for long periods of time; whereas the average time allocated for a diver is 30 minutes to an hour. Deep Trekker ROVs are depth rated up to 305m, allowing for deeper ranges than divers. Our ROVs also can withstand extremely cold and hot temperatures with little to no impact on dive time.

Due to its portability, Deep Trekker ROVs can assist in eliminating unpredictable and dangerous missions for divers. With strict safety regulations in place, our ROVs are being adopted for initial contact in search areas; ultimately leading to search and rescue missions being completed faster and more accurately to bring closure for families.

Sophisticated Options such as Sonar and USBL Positioning Systems

One of the most innovative advancements of the Deep Trekker ROV is its integration with various sonar platforms such as Blueprint Subsea’s M1200 Imaging sonars and Seatrac USBL positioning systems. Deep Trekker ROVs are extremely easy to use, however, there is an added level of difficulty when you cannot see where the ROV is, due to murky water. With the sonar integration, marine search and reovery units are able to see through turbid waters to swiftly identify targets. Operators are able to tilt the angle of the sonar; providing alternate perspectives around an object by using Deep Trekker’s unique rotating functions.

Once the target has been confirmed and located, the position of the ROV is pinpointed using the Seatrac USBL system. Unlike traditional GPS which cannot work underwater, divers are then able to swim to the target and prepare it for recovery.

Portability of an ROV is extremely important during a search and recovery mission. Many bodies of water are found in remote locations, making transportation to and from quite difficult. This often leads to search teams traveling remotely to reach these destinations. Deep Trekker law enforcement ROVs are housed in a single carrying case, making it easy to be transported to hard to reach areas.

Deep Trekker’s unique feature of internal, onboard batteries means there are no generators, topside power or bulky equipment required, allowing marine units to launch in remote areas where it is unsafe for divers to swim.

Easy to Use Technology

Deep Trekker prides itself in its easy-to-use technology. Its handheld controller is based on a gaming pad to reduce the learning curve. It only takes a few minutes to familiarize yourself with the controls, and a couple days to be an expert at piloting. The control center provides all the functionalities, including a super bright screen that is four times brighter than your laptop, and quick video out port to record, or output, your dive to a larger screen.

Submersible ROVs provide law enforcement teams with valuable tools for evidence recovery. From sunken vehicles to abandoned weapons, there are crucial pieces of evidence that can be lost underwater.

Submersible ROVs provide teams with a safe, cost-effective and time-efficient tool for locating and even retrieving evidence underwater. Comprehensive sonar integrations and mission tracking software allow teams to conduct thorough underwater searches in a variety of conditions. Furthermore, the use of an ROV keeps human divers safe during these important searches. 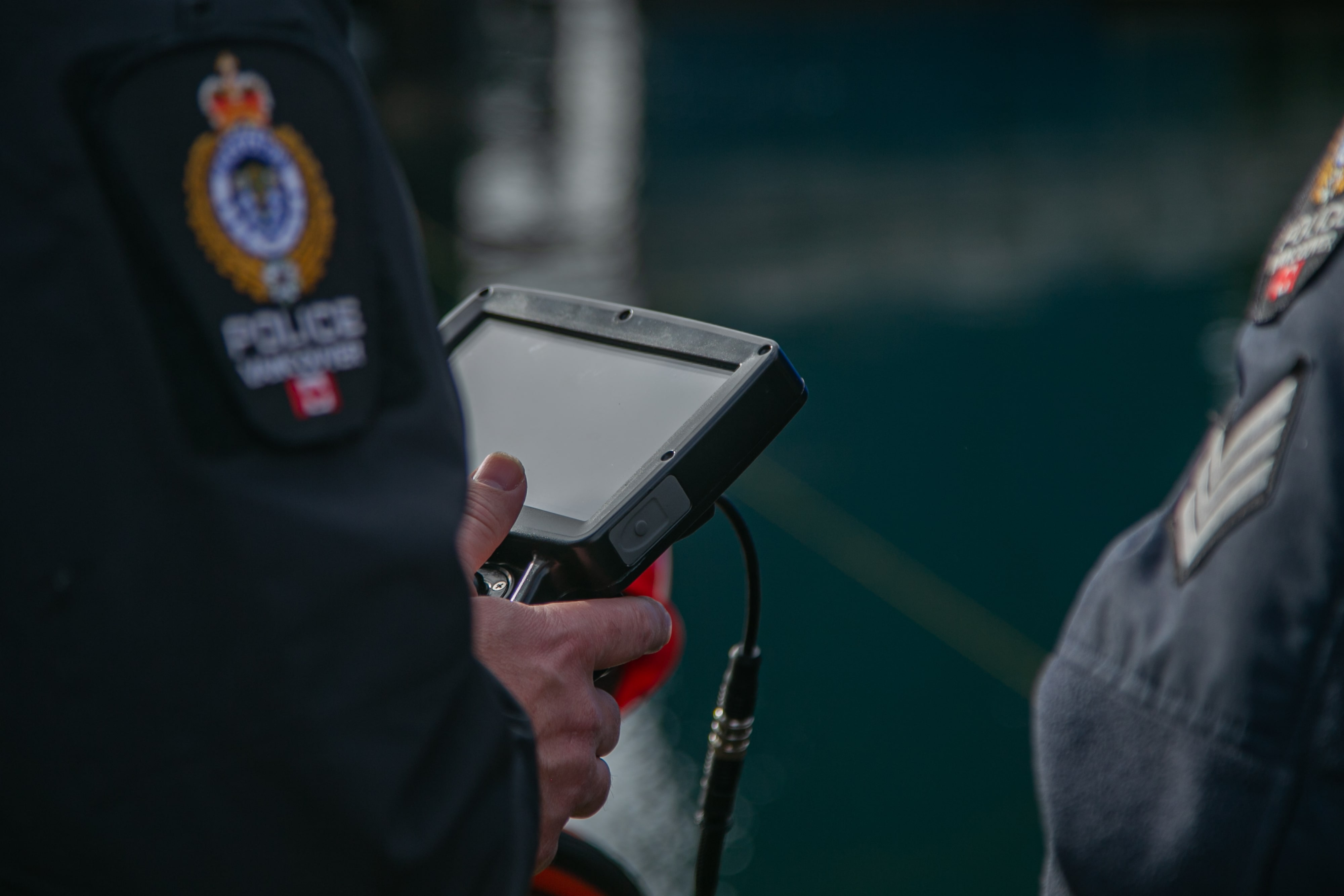 Deep Trekker was lucky enough to speak to State Police Computer Crime Unit Special Agent Glenn Lang. Lang was on the tactical unit for more than a decade, involved in numerous risky and dangerous cases.

On February 1 on Crawford Pond in Warren, Maine, two ATV riders unfortunately drove out into a dangerous area of open water. Safely and efficiently rescued by the Knox County Sheriff’s Department and the Maine Warden Service, both riders were unharmed however the ATV was lost underwater.

Covering an area of 596 acres with a maximum depth of 57 feet, Crawford Pond is a tough spot to find a sunken ATV in. Police had a flat-bottomed jon boat to retrieve the ATV with, however actually finding the sunken vehicle would require more than that.

In lieu of sending down a diver into dangerous conditions to confirm the location of the vehicle, the team opted to send in the DTG3. Using the ROV’s 4k camera, Lang was able to find the ATV within half an hour.

Once the location of the ATV was confirmed by the ROV, the DTG3 was used to tie a slipknot onto the sunken vehicle to allow it to be pulled from the water. Without the ROV the time and resources needed to actually locate the ATV would have been far greater.

The ROV was also used to retrieve the ATV riders’ auger.

ROVs for Search and Recovery

The use of submersible ROVs for underwater search and recovery is becoming increasingly commonplace.

When time is of the most importance, Deep Trekker ROVs have eyes in the water in seconds. In time sensitive situations, the ROV provides real-time visuals. Add-on sonar allows for accurate and effective navigation in the turbid waters. Tailor-made tools such as additional lighting or grabber arms allow teams to retrieve victims or evidence.

The easily transportable and deployable robots allow teams to work effectively in remote and difficult locations. In an industry as potentially dangerous as search and recovery, the assistance provided by an ROV keeps divers safe and out of precarious situations. 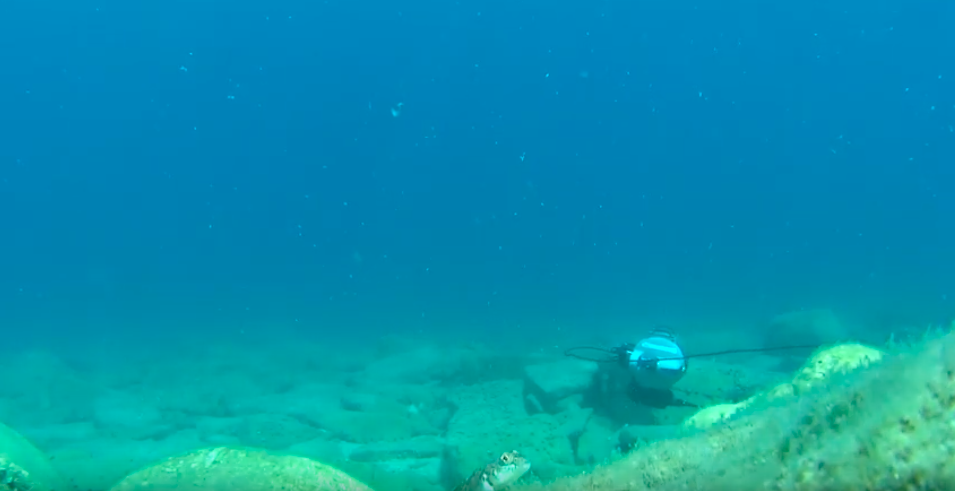 Search and Recovery Use Case

Perhaps one of the most difficult missions was Houston County Rescue’s recovery of Kelsey Starling. In an incredibly tragic boat crash on Smith Lake, Alabama, Kelsey Starling was thrown from the boat she was riding on and disappeared.

With a maximum depth of 300 feet, Smith Lake is the deepest lake in Alabama. The man-made reservoir covers a forest of trees reaching 90 feet in height, making recovery challenging and dangerous for divers. Using the DTG3 ROV, the Houston County Rescue Unit thoroughly searched the lake bed from their boat. The depth of the lake would have required divers to spend nearly three hours decompressing for a 45 minute search but the DTG3 allowed the team to search all day, reducing risk for divers and maximizing search time for Kelsey Starling.

Houston County Rescue Chief and Board President Ashton Davis noted that “by far the best piece of equipment other than divers is this ROV,” adding that the work possible with both human divers and an ROV makes for an ideal search and recovery team. The battery life allowed for long searches in deep and potentially dangerous waters without unnecessarily tiring divers, while the sophisticated camera provided searchers with a high quality view in waters with varying visibility.

Three months and one day after the devastating crash, Kelsey Starling was found in the final 300 square feet of the search area using the camera of the DTG3. The Deep Trekker team send out a sincere thank you to the entire team at Houston County Rescue, and our deepest condolences to the Starling family. 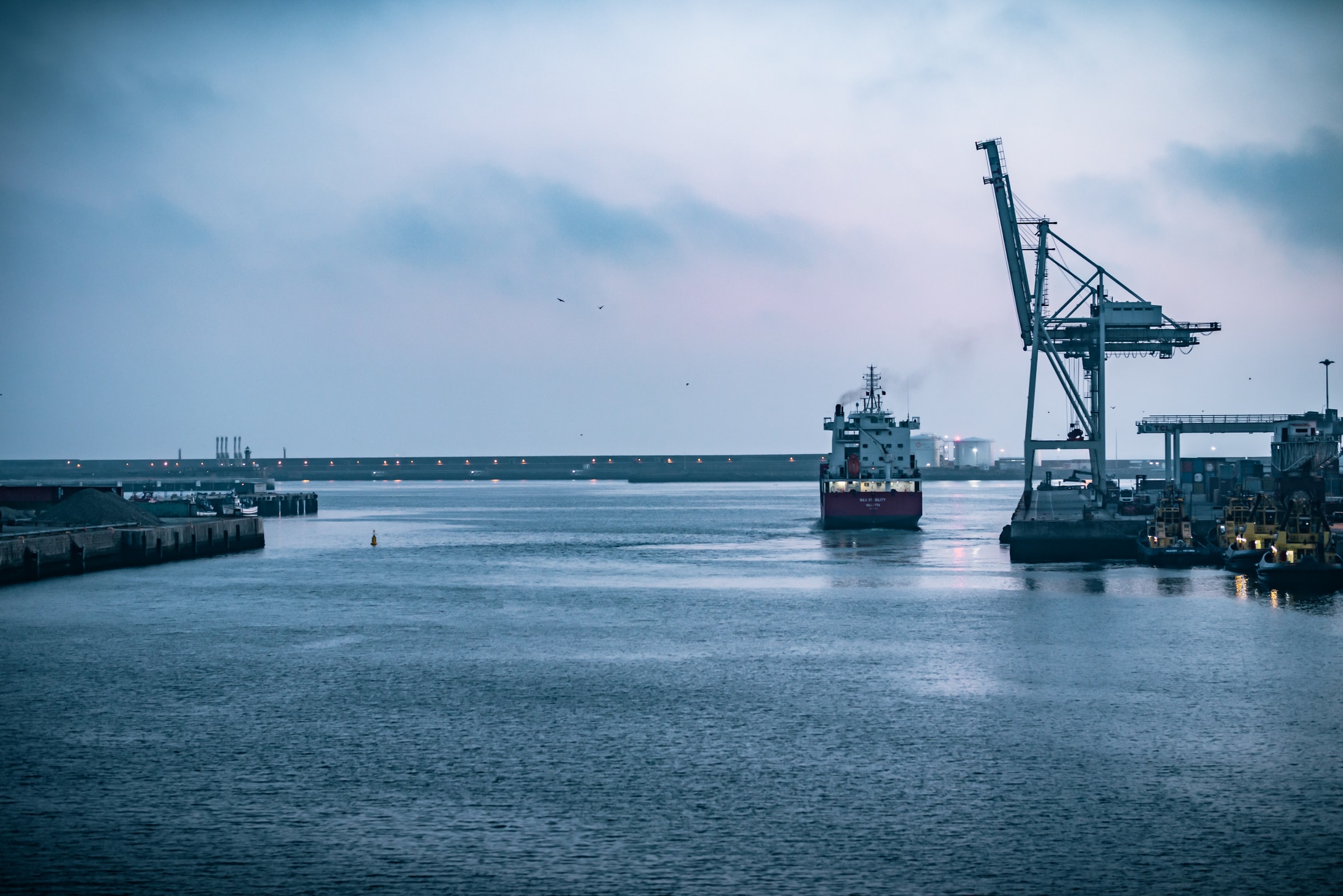 ROVs provide port authorities with an efficient and reliable way to perform hull inspections, submerged structure inspections, or any other task that requires eyes underwater to protect port safety and security.

An ROV allows port officials to get underwater in minutes at a moment’s notice to inspect ships as they arrive at port. These quick visual inspections get eyes underwater to inspect incoming ships for contraband without putting human divers in danger. Furthermore, these inspections can be flexible to suit the nature of a port. The ROV takes minutes to deploy and can do so with little to no prep. Mandatory hull inspections can be difficult with a dive team. Not only is it extremely expensive to have the necessary personnel and equipment on hand, it’s quite time consuming. Furthermore, most ports are too busy to support this type of activity. With Deep Trekker ROVs, port authorities and border security professionals are able to perform an efficient hull inspection on every single vessel to pass through their waters without the need to send a human into the water, or incur the high costs and delay of dry-docking. Quick and safe underwater visual inspections allow for effective port security practices.

Incoming ships can also inadvertently carry invasive species on their hull. Using an ROV to conduct a visual inspection of the submerged parts of a ship helps to prevent the transfer of these invasive species as they can be caught early and removed before ruining the local ecosystem.

To book a private demo of a Deep Trekker law enforcement ROV, contact our ROV Search and Recovery Specialist