HomeNewsSearching for the Avro Arrow with an Underwater Drone

Searching for the Avro Arrow with an Underwater Drone

In the 1950s, Canada was gaining global recognition as a forerunner in the development of military aviation technology. The CF 100 Canuck, was a jet interceptor/fighter designed and built by Avro Canada that was placed into mass production to serve the Royal Canadian Air Force and the Canadian Armed Forces. The Canuck served well, however, with the development of NORAD and the tensions of the Cold War mounting, there was a heightened need for an advanced jet interceptor/fighter plane that could maneuver more quickly, fly at higher altitudes and faster speeds.

The CF 105, otherwise known as the "Arrow" was Avro Canada's answer to the call of the Western world. Designed with an electronic dash, advanced radar system, and newly created aerodynamic delta wings - the Arrow project was a significant achievement for Canada and was thought by many to be the future of military aviation. 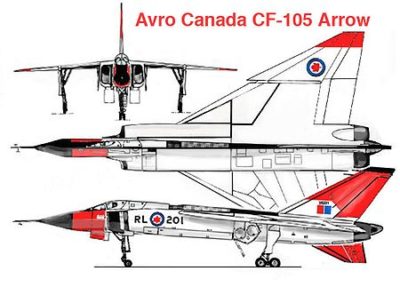 The first Arrow was rolled out of production, ready for test flights on October 4, 1957. The first three models demonstrated excellent handling and met speeds of almost Mach 1.9 in flight. The next edition of the Arrow was created with the newly developed Iroquois engine, an extremely powerful, light engine developed as part of the Avro project. The Iroquois made the planes even lighter, and faster, and ultimately assisted in test flights breaching a Mach 2 speed barrier (twice the speed of sound).

Despite what appeared to be a brilliant achievement in aerodynamics and aviation science for Canada, on February 20, 1959, Prime Minister John Diefenbaker pulled the plug on the Arrow project. Over night, 14, 528 Avro staff were unemployed. An executive order was issued to fully dismantle the five fully built Arrows. The teardown of the manufacturing lines used to create the Arrow commenced immediately, as did the destruction of the blue prints, photos and negatives surrounding the development of the planes. The nine existing prototypes were taken out to Point Petre on Lake Ontario, attached to rocket boosters and sent to a watery grave, their final resting destinations unmarked. This was the end of the Arrow program and a stalemate to Canada's place in the military technology race. In the decades since the program was abruptly ended, the Arrow has become one of Canada's greatest pieces of mystery and folklore.

Recently, a team of experts was assembled to attempt to locate and identify these pieces of Canadian history. An area approximately 64 square kilometers in size had been mapped out by #RaiseTheArrow, as potential resting places for the Arrow prototypes. The Deep Trekker team was thrilled to have the opportunity to participate in the search for sunken Canadian history and equipped their boat with sonar, a Deep Trekker Remotely Operated Vehicle (ROV), decades of sunken treasure expertise and a lot of excitement.

Searching for anything in the waters of Lake Ontario is challenging. Although the lake doesn't house the deepest of waters, the sandy bottom creates turbid water and visibility is difficult, especially when searching at a depth of 130-140 feet. Sonar quickly becomes a treasure hunters best friend. From the surface the Deep Trekker team scanned the depths below with the Gemini sonar, slowly scouring the darkness for targets of interest. It is a process that requires skill and a lot of patience, but treasure hunters know that the pay off can be huge.

The #RaisetheArrow project was ideal for the use of an underwater drone. As the exact coordinates for the Arrow prototypes were unknown, and the area of interest was quite large, it was important to be able to deploy quickly on targets determined by the sonar. Dive teams are expensive and can take awhile to suit up, being able to quickly identify an object as a mere rock, or an actual sunken piece of history is a cost-effective way to search and gave the Deep Trekker team an edge on efficiency.

As the sonar began to target potential prototype pieces on the lake bed, the Deep Trekker team deployed the ROV, equipped with a 4K camera off the back of the boat. Always giddy with anticipation, the team would guide the ROV to the bottom of the lake, maneuvering carefully so as to try not to stir up sediment and sand which would obscure visibility. As the ROV moves closer, a distinct outline begins to take shape - turbid waters make instant recognition difficult and the team would always hold their breath as the ROV camera relayed the image back to the surface. "It could just be a rock," advised Sam Macdonald, President of Deep Trekker, " Or it could be exactly what the team had been searching for"...

A Piece of Canadian History Discovered

The Deep Trekker team, with support from the #RaiseTheArrow and the use of a sonar system, was rewarded greatly in their search for treasure. Several Avro Arrow remains were identified and marked for future research. The relics uncovered were from either the prototypes launched on rockets over the lake, or perhaps from an actual Arrow. As the prototypes were intentionally crash-landed into the lake, the wreckage of the Arrow sites are quite large and spread out. Here are some of the images of what remains of the Avro Arrow we discovered:

Utilizing an ROV, a Canadian a piece of engineered technology, to search for a piece of historical Canadian technology was truly a unique and rewarding experience for the Deep Trekker team.

For more information on the Avro Arrow expedition, please reach out and contact our team >

Want to know about the equipment used to locate the submerged targets? Contact Deep Trekker Today >