When shipwreck hunting in murky waters, using an underwater drone with sonar mounts make the searches a breeze.

What is the one you just wish you could find?

Despite the integration of Deep Trekker's ROVs into a diverse field of industries - from offshore energy, shipping, to aquaculture - the passion of the Deep Trekker crew is still wreck diving. Fortunately, being located in Ontario, we are surrounded by the Great Lakes. Which means lots of water to explore and plenty of history laying on its bottom! So when precious time is found, maps and stories get studied, and a bucket list of local wrecks to attempt is formed.

A wreck that has been high on the list for years now, is the Wilma. She was a 68-foot tugboat, built in 1911 that had sunk approximately 10 miles off the shore of Ontario's Port Dover in 1936. Her final resting place, the sandy bottom of Lake Erie, 75 meters from the surface. The Wilma is neither extraordinary or famous in terms of shipwrecks, however, she had remained elusive during previous Deep Trekker searches and finding her was high on the bucket list. 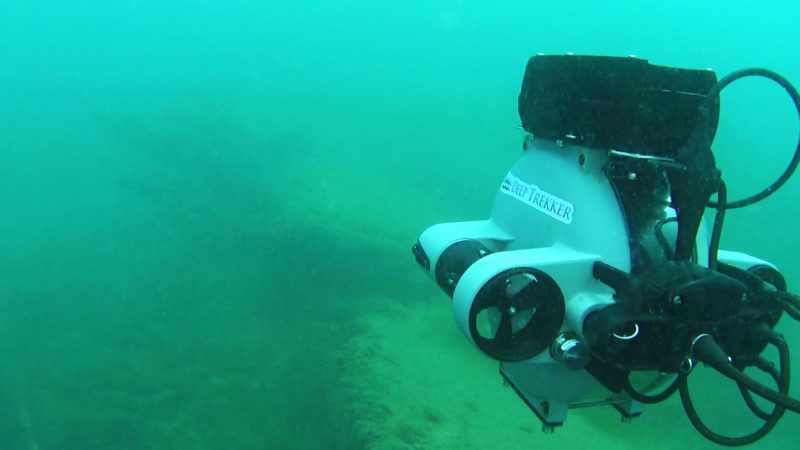 Lake Erie is one of the Great Lakes in Canada, with very poor visibility. The green waters make it difficult to see further than a couple feet ahead of the camera. When searching through turbid water, you could technically be right beside what you are looking for and may not see it. Sandy bottom, choppy water, and low visibility are all elements that had made this wreck difficult to survey.

The coordinates of the Wilma had been researched before launch, and the boat was anchored as close as possible to the wreck location - accounting for drift to bring the boat closer to the vessel. The Deep Trekker DTG2 Smart unit was chosen for its compass heading and depth indicators, along with the new Gemini 720ik mini multi-beam sonar and the TriTech USBL positioning system.

Use ROVs to improve the visibility underwater when searching for shipwrecks

This setup is sophisticated, but given the murky waters of Lake Erie, these add-ons from TriTech made our search more productive. With no visibility, the sonar shows objects at long range surrounding the ROV - while the USBL can track exactly where the ROV is and where it has already searched. This additional equipment allowed for us to consecutively fly the underwater drone and discern the sonar and USBL information, until that amazing "A-HA!" moment when the Wilma appear on the video screen.

Nothing quite compares to discovering a wreck that you’ve searched long and hard for. Deep Trekker sonar-equipped ROV's are the ideal tool to locate and investigate a shipwreck and the utilization of the sonar and USBL system made finding the Wilma a breeze with the low-visibility water.

No power requirements, robust construction, and an HD camera are just some of the reasons why our customers love using the Deep Trekker underwater drones for their shipwreck investigations.

Contact us today to learn how we can help >