According to the NOAA today is Sea Turtle Day. Did you know that these astonishing creatures have been around for 110 million years- that’s as long as the dinosaurs! Their shells are streamlined for swimming and unlike other species of turtles, sea turtles cannot actually retract their legs and head into their shells. Neat huh?

In honour of Sea Turtle Week (and of course today: Sea Turtle day) we wanted to share a little bit about each of the seven species of sea turtles that live in our oceans.

Loggerhead: This is the species of turtle that is seen most often among underwater explorers in the United States. This turtle gets its name from its extremely large head and strong jaws. Adult Loggerhead turtles can weigh between 155 and 375 lbs. They eat mainly crabs, clams, mussels and other invertebrates. They nest at intervals of 2 to 4 years and lay 3 to 6 nests per season. In each nest there is between 100 and 126 eggs. As of now they are listed as threatened under the U.S. Federal Endangered Species Act. Internationally they are listed as endangered 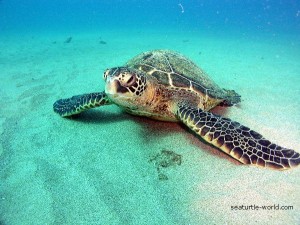 Green Sea Turtle: This species of sea turtle has a much smaller head than its loggerhead brother and can be distinguished from other species of sea turtles because of its single pair of scales in front of its eyes, as opposed to two. It gets its name from the green color of the fat that can be found under its shell. Its body is oval and looks “flat”. Adult green sea turtles can weigh between 240 and 420 lbs. The Green Sea Turtle is the only sea turtle that is entirely herbivorous as an adult. They are rarely observed in the open ocean since they generally live in bays and protected shores with large seagrass beds. They nest every 2 years and lay an average of 115 eggs in each nest. They are listed as endangered both internationally and in the U.S. 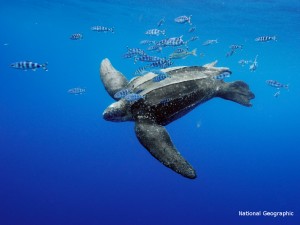 Leatherback: The “champion of the sea turtles”. It grows the largest and can weigh between 660 to 1100 lbs. (now that’s a big turtle!). They are the only sea turtle without a hard shell and are instead composed of a layer of thin, tough, rubbery skin that is strengthened by thousands of tiny bone plates. They have delicate jaws that make it difficult for them to eat anything but soft bodied species such as jellyfish. They are primarily found in the open ocean- from as far north as Alaska to as far south as the southernmost tip of Africa! They generally nest at intervals of 2-3 years though they do have the ability to nest every year. In the U.S. they are listed as endangered while internationally they are recognized as being vulnerable. 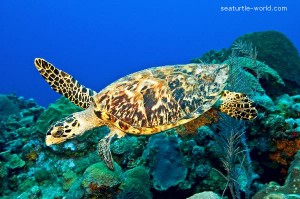 Hawksbill: The Hawksbill Sea Turtle is among the smaller of the sea turtles weighing between 101 and 154 lbs. They have narrow heads and are equipped with a “beak-shaped” jaw allowing them to find food in crevices in coral reefs. They eat mostly sponges, anemones, squid and shrimp. They can usually be found around coastal reefs, rocky areas and lagoons. They are the most tropical of all the sea turtles, living in the tropical and subtropical waters of the Atlantic, Pacific and Indian Oceans. They nest in intervals of every 2 to 4 years and lay around 160 eggs in each nest. In the U.S. they are listed as endangered but internationally they are actually considered to be critically endangered. 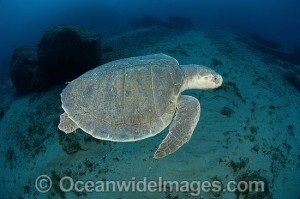 Kemp’s Ridley: Another of the smaller sea turtles, Kemp’s Ridley can weigh between 70 and 108 lbs. as an adult. They inhabit shallow areas with sandy and muddy bottoms and feed on a number of shellfish. They are equipped with strong jaws that make feeding easier. They nest every 1 to 3 years on average with around 110 eggs in each nest. They are also considered one of the most endangered species of sea turtles today. In the U.S. they are listed as endangered and internationally fall into the critically endangered category. 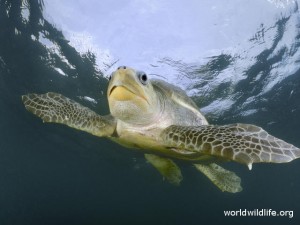 Olive Ridley: Similar to its brother the Kemp’s Ridley, this species of sea turtle has a fairly small head and bony shell. Both its front and rear flippers have one or two claws and sometimes an extra claw can be found on their front flippers. Adults weigh between 77 and 100 lbs. They have powerful jaws and often eat shrimp, mollusks, fish and crabs. They nest every year in arribadas with nests holding around 110 eggs. In the U.S. this species is listed as threatened while internationally it is recognized as endangered. 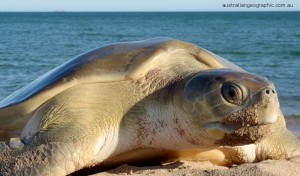 Flatback: Flatback Sea Turtles are most often found around Australia and like the Green Sea Turtle, they also only have a single pair of scales above their eyes. The adult Flatback weighs approximately 198 lbs. They eat species such as sea cucumbers, jellyfish, prawns, seaweed as well as other invertebrates. They nest 4 times per season and lay an average of 50 eggs at a time. When the hatchling emerge they are generally larger than other Sea Turtle species’ hatchlings. Flatbacks are listed as vulnerable in Australia and data deficient by the International Union for Conservation of Nature and Natural Resources.

What incredible species! We are hoping to get some footage of a sea turtle up close using a Deep Trekker ROV. They are amazing creatures who have withstood millions of years of global development. Protecting these species is an important task and the more we learn about them the better we can understand them and their needs. To learn more about the specific species of sea turtles click here.