Top 7 Energy Sources of the Future

Energy is always a hot topic. The price of oil, environmental protection, the health of the economy and of political agendas. Regardless of these issues, there are two types of energy in the world. Renewable and non-renewable. Whether it is in 10 years or 50 years, there will eventually be no fossil fuels to rely on. Here’s a quick look at the current energy consumption globally:

Petroleum continues to rise in production and there are more creative ways to derive it as well as natural gas, such as oil shales and tar sands. Coal is still in abundance, but is arguably the dirtiest of the options due its sulphuric, carbon and nitrogen emissions when burned. Hydro electricity is the most used renewable resource globally and is quite popular here in Canada. New technologies are allowing for it to become more sustainable, though significant growth in this sector is difficult due to the number of people dams generally displace once implemented.

Nuclear energy is often in debate as well because of its environmental impact. There are two types of Nuclear energy, fusion and fission. Fission creates nuclear waste, which if leaked, could destroy entire ecosystems. Fusion on the other hand creates no waste and is perpetual in its production. The technology still has maturing and if something were to go wrong, it could mean a lot more destruction than just one ecosystem (Kroh 2005).

Let’s fast forward 50 years. Here is what we could expect to see: 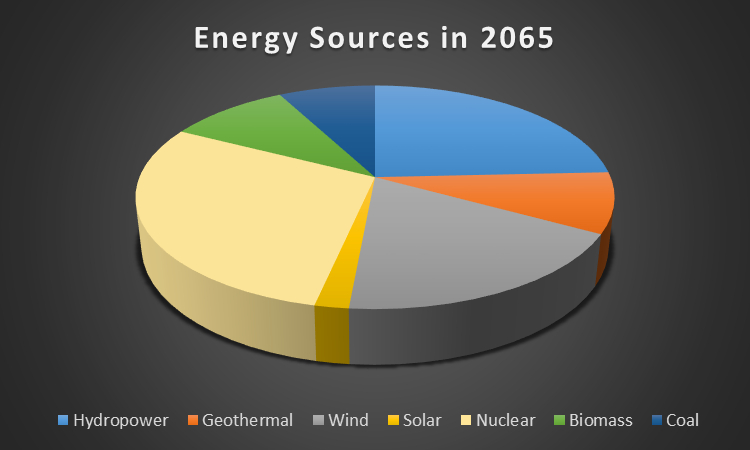 Solar Energy is extremely clean and cost effective. The problem with it however is its reliability, unless there is significant investment in proper battery and storage technology, it will not be able to support large portions of populations (BP 2015). Due to its abundance, its low cost of production and the existing coal plant infrastructure in place, we will still be burning this in 50 years unless there is more stringent environmental protocols that ban its production. The supplies should be dwindling at this point and would most likely only be being used by less developed nations. Current Geothermal production is less than 1% of the United States energy production. Though it is a consistent source of energy, the plants have a high initial cost and only can operate in certain more tectonically active regions of the world. Scientists believe that it should grow tenfold in twenty years (CNBC25 2015). This growth will be regionally specific, but these regions should recognize the great return you can get on the investment and geothermal will see a good portion of the energy production. This is a more recent energy source than fossil fuels that burns residual waste matter such as crop residues and manure. The positive of this method is the use of waste materials that cause issues in their disposal, the negative is that it is difficult to find waste that is both low carbon emission and in abundance that can fulfill our energy demands (Union of Concerned Scientists 2015). This is where our garbage disposal issues will rise and outweigh the issues of carbon emissions, especially with fossil fuels nearly exhausted. Humans were bound to have one or two dirty options on this list, right? Wind power generation has been on the rise in the past decade, but has struggled to convince the masses due to its variability and inability to support large populations on land. Recent developments in turbine technology and ability to place turbines offshore make it a more viable option (CNBC25 2015). Over 40% of the world’s population lives within 100 kilometres of the coast (UN 2010). Any energy source that has the ability to harness the power of the ocean will be successful in long term energy production due to abundance and proximity to humans. Harnessing the power of the ocean leads to this next one. Hydroelectricity must be used as a broad term for power generated from water, whether it be through tidal, M3 wave technology or hydroelectric dams, water through an intake to spin a turbine is a system that can work perpetually and if properly maintained, inspected and planned should not cause environmental harm.

Here is the boom or bust candidate. Fission technologies will eventually be outlawed after a few more horrific tragedies, unless there is a move to offshore nuclear facilities that use the ocean as a natural reactor coolant (CNBC25 2015). Fusion on the other hand has the potential to be a high efficiency resource that is also extremely clean. If the technology develops to a dependable level, it could potentially be implemented anywhere in the world. Come see us at Booth 4102 at HydroVision in Portland July 14th - 17th to hear more about how Deep Trekker helps protect Hydroelectric Dams for the future.

Throughout May and June join us every Friday, for Think Tank Fridays. Our new virtual series featuring live expert panels, technical discussions and...

Protecting the integrity of a ship’s hull is extremely important in order to keep a vessel at its top performance. Using an ROV, Chugoko Paints...