Examining the use of a Deep Trekker DT340 Pipe Crawler to aid in sinkhole prevention. What causes sinkholes and how regular infrastructure inspections limit costly repairs and unwarranted closures.

Sinkholes slowly develop over time in and around areas where limestone or other structurally weak stones lay below the surface. Water gradually dissolves some of this subterranean stone and creates a cavity beneath the surface. The overbearing stress and weight above the void cause the ground strata to then collapse inward and result in a sudden depression which we refer to as a “sinkhole”.

In the United States, Florida experiences some of the highest rates of damage from sinkholes. Nearly $300 million per year is required to repair and deal with the consequences of sinkholes. Filling a hole and restoring utilities, roads, and the landscape can also take weeks or in larger instances, even months.

It is often difficult to predict where sinkholes may develop. However, in some instances, areas of high risk due to deteriorating underground utility systems can be identified. Sinkholes in urban areas are often caused by aging sewer pipes and compromised water mains. Water leaks from corroded, fractured or old pipes erode the strata around it and form an unstable void. In addition, activities on the surface such as construction or heavy traffic reduce the integrity of pipes. When a large section of pipe does collapse, the wall structure may pull large volumes of the surrounding soil down with it.

Municipal utilities often work in junction with road construction crews to unearth areas known to have aging pipes and replace these mains before they become an issue. Digging up crumbling infrastructure on a long street can cost millions of dollars. However, preventative replacement costs less than encountering the sudden costs of ruptured mains.

Proactively replacing structurally failing infrastructure shouldn't be a guessing game. Guessing which pipes may need attention is a risky proposition. Millions of dollars can be misdirected to one street but two blocks over, a water main bursts and causes excess spending and unwarranted closures.

Conducting inspections of the pipes before digging aids in a judicious allocation of funds available to replace buried and aged infrastructure. Cities and towns of any size can get eyes in their pipes using the fully submersible Deep Trekker DT340 Pipe Crawler.

The completely portable system is powered by onboard batteries which last up to 8 hours on a 1.5-hour charge. Consequently, there are no topside generators to lug around in a large truck. A Deep Trekker pipe crawler has the ability to be deployed literally anywhere. An operator has the ability to inspect the internal structure of the pipes with the pan, tilt, and zoom camera. The live video feed is analyzed on the spot from the lightweight, handheld controller or stored on a DVR or other storage device.

Deep Trekker’s DT340 Pipe Crawler allows municipal utilities to conduct on-going, routine and affordable inspections of their concealed infrastructure before having to dig.

In the case where a pipe is submerged in a body of water, the Deep Trekker DTG3 Remotely Operated Vehicle (ROV) is the ideal inspection tool. Commonly known as an underwater drone, the ROV is built with the same portability as the DT340 Pipe Crawler. The fully submersible ROV can be equipped with a Cutter, 2 Function Grabber and a laser scaler to aid in assessing a maintenance or repair job. 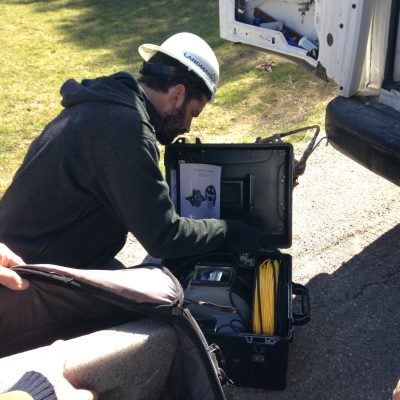 To proactively prevent sinkholes in your area, contact us today.

The Lighter Side of Sinkholes